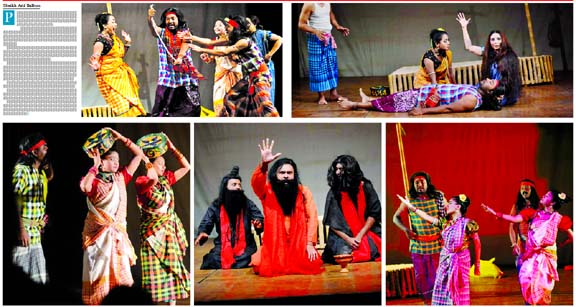 Sheikh Arif Bulbon :
Padatik Natya Sangsad staged its play Beder Meye recently at Studio Theatre Hall of Bangladesh Shilpakala Academy in the capitalâs Segunbagicha area.
The play, written by poet-playwright Jasimuddin and directed by Dr Irin Parvin Lopa, depicts the strength and struggles of the people of the Bede community (snake charmers), specially its women.
Through portrayal of the tragic story of Champaboti, a beautiful bede girl, the play shows the inner strength of women and the courage with which they deal with the misfortunes of life.
Champaboti, while performing at a village along with several members of her group, is kidnapped by the villageâs ruler. The village chieftain tells Champaboti that if she does not listen to him all the members of Champaâs community will be killed.
A helpless Champa agrees to listen to the chieftain. However, she manages to escape after a few days.
After returning home she finds that her lover Goya has been bitten by a snake. Champaboti sucks the venom out of Goyaâs body but she dies in the process.
Padatik artistes Shamsi Ara Sayeka, Shakhwat Hossain Shimul, Mominul Haque Dipu, Imran Khan, Afroza Pinky and others acted in different roles in the play Beder Meye. n