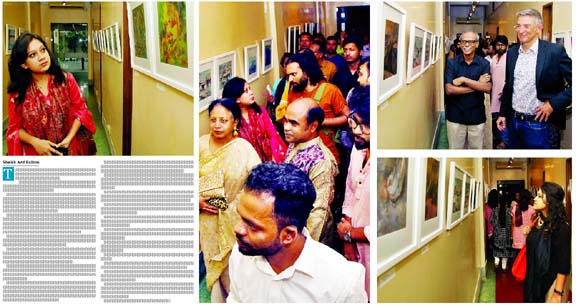 Sheikh Arif Bulbon :
The group painting exhibition titled Adherence is going on at the Galerie Zoom, Alliance FranÃ§aise de Dhaka (AFD) in the capitalâs Dhanmondi area.
Syed Hasan Mahmud, Principal, Jhapi School of Art, and Rumi Noman, Director, Shilpangan Gallery, attended the opening ceremony as the special guests.
The participating artists are: Bappy Linkon Roy, Iqbal Bahar Chowdhury, Kuntal Barai, Mahabub Alam, Nabaraj Roy, Nabila Nabi, Nasrin Jahan Onika, Pervaj Hasan Rigan, Pritam Pitu, Prodip Shaha, Raijn Mustafa Dipraw, S M Ehsan, Sajia Rahman Sondha, Sharmin Akter Lina and Zakia Afrose.
Mahabub Alamâs artworks limn a fluid and bopping ink detailing trees and landscapes in a way that they may seem very familiar to a Bangladeshi viewer - the fluttering trees in windstorm are always relatable - or may seem fresh and original as Alamâs style departs from the classic Asian ink art of scrolls and calligraphy.
The acrylic artworks by Iqbal Bahar Chowdhury visualise a pirouette, both literal and figural; in the abstract artefacts they depict telling a story with a low-key palette.
Artist S M Ehsanâs collagraphs are textural, expansive and statement-makers. Unlike conventional prints, these prints employ a wide variety of mucilaginous materials as well as techniques such as etching and lithography to give off clever effects.
A more classic yet cliffhanging approach is taken by Kuntal Barai whose works devise a maze of both low-key and high-key expressionistic colours, but they may twirl into a figure with external reality.
Among the artists in the group, the artworks by Pervaj Hasan Rigan have more representational forms and the embodying colours are also more florid and sherbet. But they are also cacophonous in the sense that they are not stodgy in portraying a portrait that quickly seizes the spectatorâs eyes.
Hand-knotted weavings and wooly knits bring about a collection of tapestry from Nabila Nabi, whose works depict natural elements like a red rose where the forms are strong and convincing.
Nabaraj Royâs forms are also depictive where animals and birds congregate together in a dappled plain. He centres on the traditional items and pieces of Bangladesh's tapestry of cultures, races, and customs.
Using an acrylic medium, Sharmin Akter Lina paints representational figures such as a young woman with an ornamented bird on her hand amid a strong presence of green as well as leaf motifs.
The streaked and spattered effects in Prodip Sahaâs artworks show maybe a house in the hill or nature and man-made architecture blended in harmony.
Bappy Linkon Royâs colours are restless. They splatter with each other to illustrate a viscous outlook with tinges of green, red and blue here and there.
Taking in the Bangladeshi folk patterns and stylistic lineage, Pritam Pituâs canvasses show birds on bunting revelling in a festival on a sunny day.
Rajin Mustafa Dipraw puts patches of colours in different shades of blue and orange in his artworks accomplishing a lovable motion in the process.
Patterns of gamchha weaving are recognizable in Zakia Afroseâs works.
Sajia Rahman Sondhaâs rain-inspired artworks may evoke petrichor as her artworks use earth tones as their colour schemes.
Nasrin Jahan Onika employs aquatint technique to achieve artworks that exude eeriness and exoticness, among other feelings, atop an unlit backdrop.
The participating artists are an intense observer of their surrounding ambiances and they meticulously projected them. Their paintings are refreshing and provide the spectators with a sense of pleasure.
The exhibition will continue till September 28.