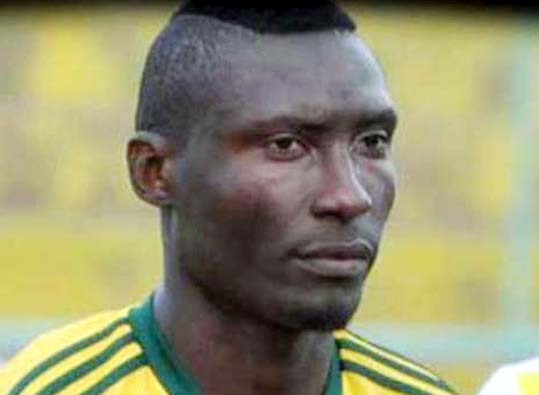 Cameroonian footballer Albert Ebosse has died after being hit by an object thrown by fans at a game in Algeria.
Ebosse, who was 24, was declared dead after being taken to hospital in Tizi Ouzou, east of the capital Algiers.
The JS Kabylie striker, who had scored in a 2-1 home defeat by USM Alger, was hit when spectators started throwing objects from the stands as the teams left the pitch at full-time.
The Algerian interior ministry has ordered an investigation.
Ebosse was the leading scorer in the Algerian league in the 2013-14 season, with 17 goals.
It has not been confirmed what hit him, but one Algerian newspaper reported that home fans, angry at their team's defeat, were throwing rocks.
A statement from Ebosse's club said he had "succumbed to a head injury" after being struck at the end of the match.
Opponents USM Alger described the news of Ebosse's death as a "bombshell" and said it was "terrible" and "saddening".
A special meeting of the Algerian league (LFP) has been convened for Monday morning and the stadium has been closed until further notice.
The league's president, Mahfoud Kerbadj, was at the game.
He described Ebosse's death as a catastrophe for the national game and sent his heartfelt condolences to the player's family.
Kerbadj added that Ebosse had won the hearts of thousands of Algerians and was highly regarded by both team-mates and opponents.
The president of the Confederation of African Football, Issa Hayatou, issued a statementÂ  condemning the violence.
"My thoughts go out to the family and friends of this young man who enjoyed his job peacefully and went further to pursue his passion for football abroad," wrote Hayatou.
He added: "African football cannot be the breeding ground for hooliganism whatsoever. We expect exemplary sanctions to be taken against this grave act of violence."