US envoy calls for 'full investigation' 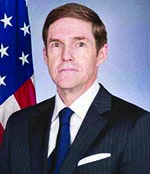 US Ambassador in Dhaka Earl Miller has called for a full investigation into the killing of BUET student Abrar Fahad.
"I am shocked and saddened by the killing of BUET student Abrar Fahad.Â  Freedom of expression is a fundamental right in any democracy," he said in a statement posted in Facebook.
"We join all voices asking for a full investigation and offer heartfelt condolences to his family."
Earlier the UN and the UK in separate statements have condemned the horrific killing and demanded justice. The body of Abrar, a second-year student of electrical and electronic engineering of BUET, was found on the staircase of his hall in the early hours of Monday.
Police arrested at least 13 student leaders of the ruling Awami League's student wing, Bangladesh Chhatra League, within few hours in this connection.