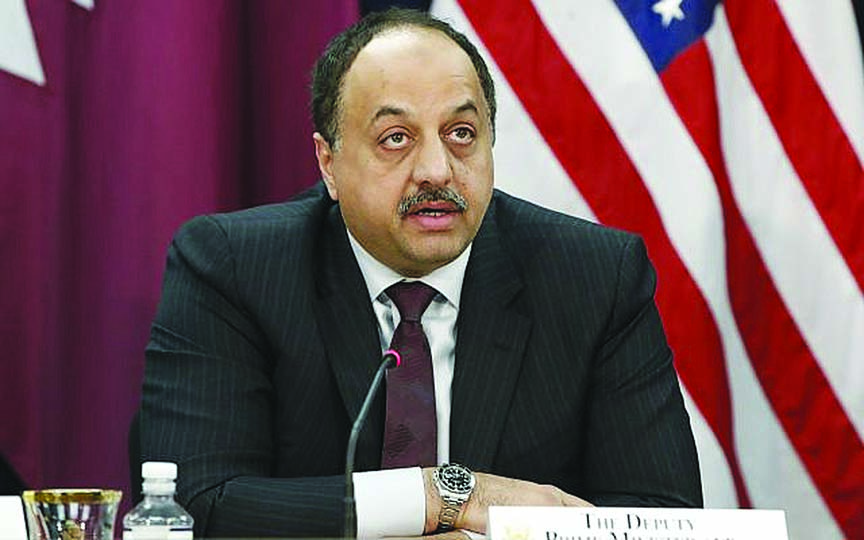 AFP, Doha :
Qatar's defence minister ruled out Wednesday the possibility of a war between the United States and Iran amid rising tensions in the Gulf following attacks on oil tankers.
Doha is an ally of Washington, but also has good relations with Tehran that has helped it overcome a political and economic boycott by Saudi Arabia and its Gulf allies over accusations the tiny kingdom backs the Islamic republic and extremists.
"I don't see a war in the future between the United States and Iran," said Khalid bin Mohammed al-Attiyah during the Global Security Forum in Doha.
"A war will be in no one's interest," he said.
Tensions have soared in the Gulf in recent months with a series of attacks on oil infrastructure and tankers which have raised fears of a war between the arch-rivals.
Last month, two Saudi oil facilities were attacked, temporarily halving the kingdom's crude output and setting oil markets alight.
Yemen's Iran-backed Huthi rebels claimed responsibility, but US officials blamed Tehran and charged that the rebels did not have the range or sophistication to target the facilities.
Tehran has denied involvement and warned of "total war" in the event of any attack on its territory.
Tensions between Iran and the United Stated have soared since US President Donald Trump pulled out of a 2015 international nuclear deal that was meant to lift sanctions in exchange for a commitment from Tehran to curb its atomic programme.
Trump reimposed economic sanctions and in May his administration said it would unilaterally force all countries to stop buying Iran's oil, one of Tehran's main sources of wealth.
Tehran soon afterwards shot down an unmanned US drone. At the very last minute, Trump stepped back from launching a strike on Iranian assets in June saying it would cause too many casualties.
The United States might feel pressured to attack Iran for other reasons. Iran is the last country on the list of regime change in the post-9/11 period that has thus far escaped American military intervention, directly or through proxies. Iraq was invaded in 2003, Libya was attacked in 2010, and Syria has been devastated by civil war. For the foreseeable future, none of these states will be able to influence Middle East dynamics significantly, nor do they pose any military threat to America's regional allies, notably Israel. In short, Iran is the last remaining link in this chain of dismantling state systems in the region. Moreover, at the time of the U.S. invasion of Iraq, some in the United States and in the region would have preferred that America attacked Iran first and then Iraq.
These people will not feel safe until Iran is attacked.
A main goal of security hawks in the United States, as described in the 1992 US Defense Planning Guidance (which has never been superseded), has been "to prevent any hostile power from dominating a region whose resources under consolidated control be sufficient to generateÂ  global power." The document lists Southwest Asia as one such region. In this region, Iran is the country best suited to become the hub of regional power. This concern about Iran's potential did not start with the Islamic revolution. America's change of heart regarding the shah was partly because of his ambitions to turn Iran into a viable economic and military power. Any other viable regime in post-Islamist Iran, including a nationalist regime, would also want to develop the country's resources. This might be one reason why the current American administration favors the Mojahedin e-Khalgh (MEK), rather than any other opposition group, as the successor to the Islamist government. Reports are circulating that the United States has moved back some MEK fighters to Iraq, perhaps in anticipation of moving them into Iran. The MEK was willing to support Saddam Hussein and cede Iran's Khuzestan province to Iraq. There is no reason to think that it won't similarly follow U.S. bidding.
The hawks' ideal scenario involves Iran's disintegration along ethnic and linguistic lines, or at least its transformation into a loose federation with a weak central power. Such goals, which can't be achieved through sanctions and destabilization efforts, would require military operations, though short of a full-scale land invasion. A massive air strike targeting Iran's vital infrastructure would suffice. For some years now, many analysts have recommended such an option. Amitai Etzioni, for instance, once said that the United States should confront Iran by bombing its civilian infrastructure or risk losing the Middle East. Key U.S. policymakers in the Trump administration share such views, as do key U.S. regional allies.
There is one last reason why the US might attack Iran. Many in America have not forgiven Iran for its 1979 revolution, the hostage crisis, and the defiant behavior it adopted. They believe that allowing Iran to get away with this behavior sends the wrong message to other potential challengers. In short, Iran is a rebellious satrapy that must be subdued.