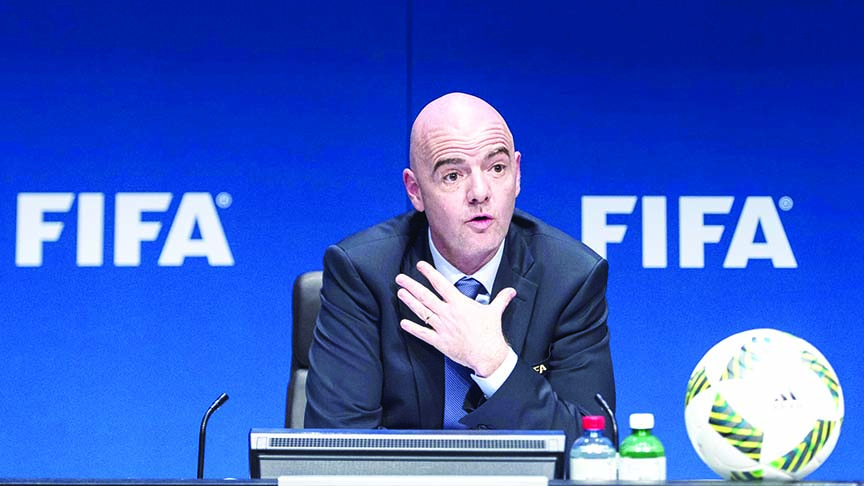 AFP, Seoul :
FIFA president Gianni Infantino said he was "disappointed" after attending a historic but bizarre World Cup qualifier between North and South Korea that had empty stands and no live broadcast.
The rare match in the North Korean capital ended 0-0 on Tuesday, with Infantino one of the few people allowed to see the surreal game play out at Pyongyang's Kim Il Sung Stadium.
"I was looking forward to seeing a full stadium for such a historic match but was disappointed to see there were no fans in the stands," he said in an interview published on the FIFA website.
"We were surprised by this and by several issues related to its live broadcast and problems with visas and access for foreign journalists."
No foreign media were at the game - the first competitive men's match to be played in Pyongyang between the two sides, whose countries are still technically at war.
Frustrated South Korean fans who were not permitted to travel to the game will have to wait days to see it on television after officials bring back a DVD recording.
"For us, freedom of the press and freedom of speech are obviously paramount, but on the other hand it would be naive to think we can change the world from one minute to the next," Infantino said.
The match comes in the wake of a series of North Korean missile tests that raised tensions in the region, and after the breakdown of talks with the US over Pyongyang's weapons programmes.
It is a far cry from the cross-border warmth of last year, when South Korean President Moon Jae-in seized on the Pyeongchang Winter Olympics to broker the Pyongyang-Washington discussion process.
The only simple way to follow the match, which the Asian Football Confederation (AFC) had billed as "one of the most eagerly anticipated fixtures" for years, was a limited online text commentary posted on the FIFA and AFC websites.
Meanwhile North Korean state media did not offer much in the way of colourful description in its report on the match.
"The game of attacks and counterattacks ended in a draw," summarised the official Korean Central News Agency in a two-line dispatch.
Infantino said he and his team had raised questions of free press and speech with North Korea's football association.