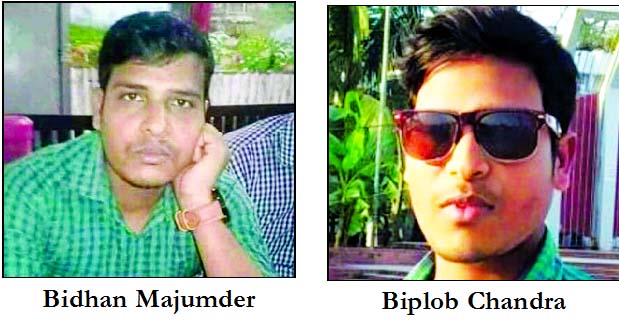 The brother-in-law of Biplob Chandra Baidya Shuvo, whose Facebook account was hacked to spread religious slur triggering deadly clashes in Bhola, has reportedly gone missing.
Bidhan Majumder, 35, the husband of Biplob's sister, and 'Sagar', 18, an employee of his jewellery shop in Dukarhat Upazila, were taken away by people posing as TV crew for an interview from the shop on Monday, locals said.
Bidhan's father Binoy Bhushan Majumder filed a general diary or GD with police on Tuesday over the incident, Dularhat Police Station OC Mizanur Rahman Patwary said.
"We've informed all the police stations. Police are searching for them," the OC said. Bidhan runs a shop, Maa Jewellers, at Rouder Hat. He and Sagar went to the shop from their home at West Char Umed village on Monday morning, a day after the clashes between police and locals at Borhanuddin left four killed.Â  Â
"Some people on a microbus came and took them away saying they will be interviewed on Monday afternoon. They have been missing since then," Bhola Hindu Buddhist Christian Unity Council Convenor and Jewellery Shop Owners Association General Secretary Abinash Nandi said.
Shuvo filed a GD last Friday after hackers demanded money from him and spread comments belittling Prophet Muhammad from his Facebook account through Messenger.
The hackers also spread screenshots of the messages stirring protests. On Sunday, angry Muslims gathered demanding Shuvo's punishment and attacked the law enforcers even after police had informed the Islamist leaders about the hacking of his Facebook account.
Clashes ensued and left four people killed and over 100 others, including policemen, injured.
Shuvo and two suspected hackers are in jail over the incident.
Investigations have also been launched into the clashes.