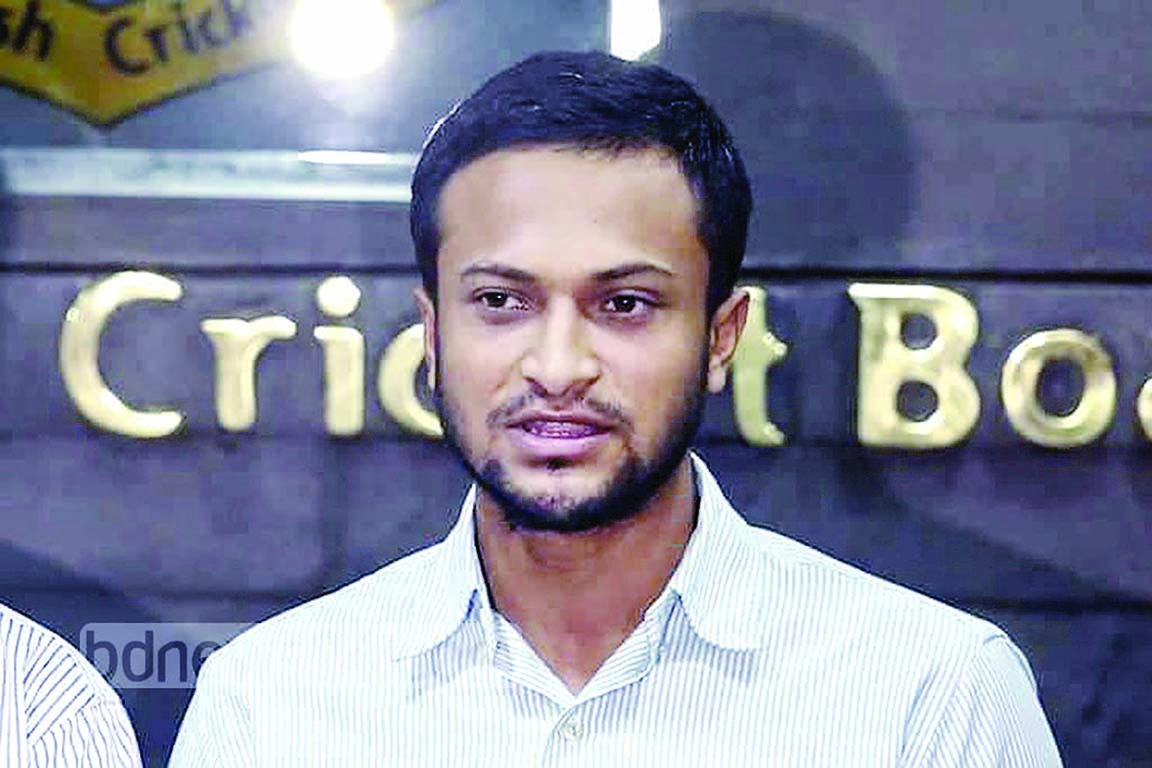 Deepak Aggarwal, who the International Cricket Council has identified as a corruption suspect, told Shakib Al Hasan during a conversation on WhatsApp in 2017 that he wanted to meet the player.
But the Bangladesh Test and Twenty20 captain wanted to meet the bookie "first" in another conversation during the Indian Premier League last year, Shakib himself confirmed to theICC's Anti-Corruption Unit earlier this year.
Aggarwal wanted inside information and sought details of Shakib's dollar accounts in the conversation.
Shakib is well aware of the ICC's Corruption Code that obliges every player to report such offers.
In 2008 or 2009, he also reported an approach he had received to engage in corrupt conduct to an anti-corruption official.
The global governing body of the game banned Shakib for two years, including one year of conditional suspension, on Tuesday for his failure to report the "corrupt approaches".
In the detailed decision, the ICC revealed the saga that started when he was a member of the Dhaka Dynamites of the Bangladesh Premier League tournament by the end of 2017.
Shakib was aware that a person known to him had provided his telephone number to Aggarwal.
Aggarwal had asked this other person to provide him with contacts for players playing in the BPL.
In mid-November, 2017, at the instigation of Aggarwal, Shakib exchanged various WhatsApp messages with Aggarwal in which Aggarwal sought to meet him.
In January, 2018, he was selected as part of the Bangladesh team taking part in a tri-series between Bangladesh, Sri Lanka and Zimbabwe.
During this series, he and Aggarwal engaged in further WhatsApp conversations.
On Jan 19, 2018, he received a WhatsApp message from Aggarwal congratulating him on being named man of the match in that day's game.
Aggarwal followed this message with a message saying "do we work in this or I wait til the IPL".
The reference to "work" in this message was a reference to him providing inside information to Aggarwal.
On Jan 23, 2018, he received another WhatsApp message from Aggarwal in which Aggarwal made another approach to him to provide him with inside information, saying, "Bro anything in this series?"
On Apr 26, 2018, Shakib played for the Sunrisers Hyderabad team in their IPL match against Kings XI Punjab.
He received a WhatsApp message from Aggarwal that day asking him whether a particular player was going to be playing in the game that day.
Aggarwal continued this conversation with him by talking about bitcoins, dollar accounts and asked him for his dollar account details.
It is during this conversation when Shakib told Aggarwal that he wanted to meet him "first".
A number of the messages exchanged between Shakib and Aggarwal have been deleted, but Shakib confirmed to the ICC that these contained requests from Aggarwal for inside information.
One of the world's top all-rounders, Shakib did not report any of the instances when Aggarwal sought information from him.
Shakib told the ICC that he had concerns over Aggarwal, feeling he was a bit "dodgy".
Following their conversations, Shakib had the feeling that Aggarwal was a bookie.
Aggarwal wanted the inside information for betting purposes, the ICC said.