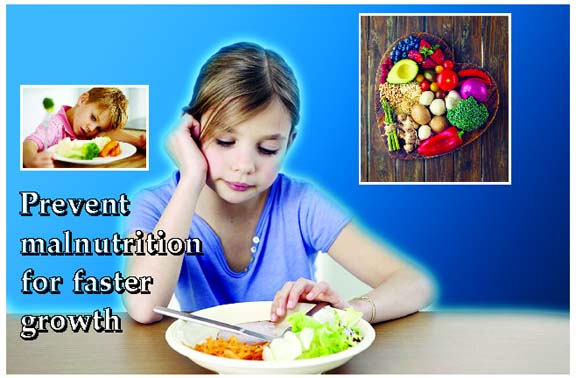 Dr A M M Anisul Awwal, PhD :
Global literature reveals that the populations of the developing countries are the worst sufferers of malnutrition. Women and the minor children are the primary victims as depicted by low Body Mass Index (BMI equal or less than 18.5 is considered as chronic malnutrition) and high incidence of Low Birth Weight (LBW- Birth weight less than or equal to 2500gm) respectively. In the developing countries, on an average, more than 60 per cent of the women of child bearing age (WCBA) have been suffering from nutritional anemia, about 20 per cent of them have some degree of Iodine Deficiency Disorders (IDDs), Vitamin âAâ deficiency (about 1:1 per cent - much higher than the expected cut-off level) disorders are still a major contributing factor for disease and illness and so on.
The prevalence of Protein Energy Malnutrition (PEM) is still the single most important factor for contributing death (about 55 per cent of child mortality) in the developing countries.
In the developing countries, about 50 per cent deaths among children under 5 years of age are attributable to malnutrition. About 60 per cent pregnant women and children less than 5 years of age have been suffering from nutritional anaemia (iron deficiency anaemia). About 35 per cent populations have iodine deficiency of various grades. The incidence and prevalence of night blindness and blindness due to Vitamin-A deficiency are also noticeably high, but within acceptable range amongst the under five populations.
Malnutrition (both under and over) is a global problem with definite trend of inclination towards developing countries. The extent and magnitude of the problems of malnutrition varies significantly across countries and regions. Analysis of data reveals that malnutrition is more predominant in Asia, particularly in the South-Asia than in any other region of the world. UNICEF reports that 70 per cent of the worldâs malnutrition is in the South-East Asia. India and Bangladesh constitutes 70 per cent of malnutrition prevailing in this region. Women and girl children are the worst sufferers in this case.Â  Hunger and malnutrition persist in spite of important achievements in agricultural productivity and economic growth.
âChronic hunger,â which is largely found in low-income food-deficit countries, results from continuous inadequate food intake and is perpetuated by poverty, illiteracy, social taboos, lack of communication and lack of healthÂ  and caring services. Malnutrition, which results from a combination of inadequate food, lack of health facilities and inadequate caring practices, primarily affects the more vulnerable population in a household, mainly women and children. Poor maternal nutrition results in Low Birth Weight (LBW), which intern puts at higher risk of death, morbidity, growth retardation during childhood and adolescence, lower IQ, and thus, perpetuates the cycle of malnutrition across generations.
On the other hand, development has been defined in many ways. The most common and widely accepted definition of development includes not only economic aspect of development, but also the overall reduction of IMR, MMR, improvement of nutritional status, health status, percentage of literacy and school going children, reduction in the level of corruption, mismatch between the person in the chair and the nature of responsibilities they need to perform (governance), socio-political unrest, life expectancy at birth etc.
Although the Quality of Life Index (QLI) has improved significantly particularly in the last 10-15 years, nonetheless, we have to go a long way to achieve the goals of Sustainable Development Goals (SDG).
The annual population growth rate of this country is about 1.2 per cent and is considered still to be very high in comparison to the economic growth rate and overall development indices that have been set to bring this country in the group of âmiddle income countries.â
Many of the indicators of social and human development still do not depict a promising and enthusiastic picture with respect to the Quality of Life Index of the average population.
The trends in population growth, disease burden, mortality, internal migration, and last but not the least, irreparable and crippling disorders of high prevalence of malnutrition are persistently creating hurdles in overall national development. Nutrition is considered, for humans, as the âfoundation of Health, and health is the backbone of a nationâ - just like the foundation of a superstructure. Without a significant proportion of well nourished population of the country, no nation can expect to be a âhealthy and productive nation.â Human brain development and immune systems fully depends on the nutritional status of the individual, and thus, acceptable nutritional status is considered as the basic determinant for overall socio-economic development of the country.
Under the light of National 7th Five Year Plan and Vision 2021, compiled by the Ministry of Health and Family Planning has been initiated. The overall situation of health, population and nutrition will be hugely improved if this program gets implemented properly. This program will play a huge and important role to achieve the health related targets of the Sustainable Development Goals by 2030.
There is no single approach to address malnutrition. The issue itself is a cross-cutting one, and thus, should be tackled from multiple directions. The core importance lies in the efficient management of BCC (behavioural change communication) activities at all levels of intervention with optimum services utilising the experts of the country. The role of the journalists and the mass media is magnanimous and unique in creating a positive attitude towards expected behavior change in relation to health, family planning and malnutrition through innovative ideas, constructive criticism, reporting, supporting, writing, forming interest groups, etc.
In this modern era, the âkey to successâ in the social sector is largely in the hands of the journalists and the mass media along with the sincere devotion of the persons involved in the implementation of nutritional activities.