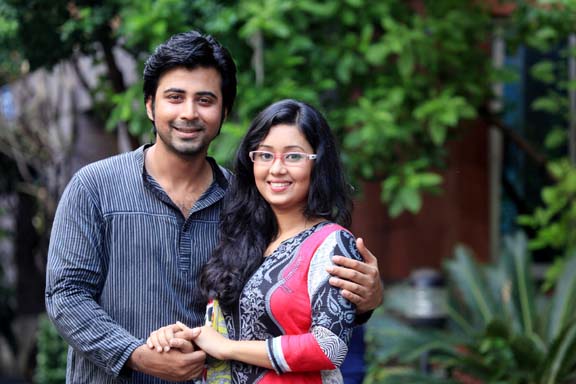 For the second time popular actress Farhana Mili and TV actor Afran Nisho have worked together as a pair in a TV play.
Directed by Ashraf Dipu script and dialogue of the play titled Theatrewala were also written by Dipu himself. Shooting of the play was taken place in different places in the cityâs Uttara are last week.
In the play, Nisho acted in role of a theatre activist Shayan, while Mili acted in role of a theatre student. Therefore, Saberi Alam and Abdullah Rana also acted in other roles in the play.
While talking about working against Farhana Mili again Afran Nisho said, âPersonally Mili is a nice person. She has same kind of simplicity after Monpura became blockbuster hit in the film industry. I never found âheroine typeâ attitude in Mili. Her main quality is she can give proper respect to her co-actor. She is a matured actress.â
Mili shared her feelings by this way, âAfran Nisho is a full-fledged actor. My previous work against Nisho was also superb. I think viewers will also enjoy our new work.â
The play Theatrewala will go on air in satellite channel on the occasion of coming Eid-ul-Azha, said its director Dipu.