Another 'tortured' housemaid returns from KSA 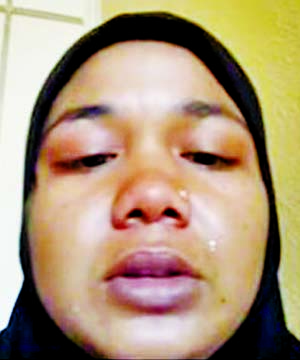 Hosna Akhter - a Bangladeshi housemaid who appealed for help in a video alleging torture by her employer in Saudi Arabia-returned home.
She arrive at Shahjalal International Airport in Dhaka on Wednesday night in an Air Arabia flight, said Tanvir Hossain, an officer of Expatriates Welfare Desk at the airport.
The authorities in Saudi Arabia rescued her after she had appealed for help in a video call to her husband where she had made the allegations of torture.
Bangladesh took steps to bring her back after the media reported the about video which also went viral on social media.
The 24-year-old woman from Habiganj's Ajmiriganj went to the Gulf kingdom around three weeks ago, on a Tk 22,000 monthly pay contract.
In the video call, the woman appealed for return to Bangladesh alleging "unbearable torture" by her employer.
"They cranked up the torture on me when I told them I wanted to return home. The people in the agency treated me badly when I called them. I can't bear it anymore. Please save me in any way," she told her husband.
She fell ill due to "excessive pressure of work and torture", the man said.
On Nov 15, Sumi Akter of Panchagar returned home from Saudi Arabia after her appeal for help on a similar video drew huge criticism of the authorities for their "failure" to stop torture and sexual abuse of Bangladeshi women in the Gulf kingdom.
She was among at least 961 women who returned from Saudi Arabia in 10 months this year.
Forty-eight of them died there.