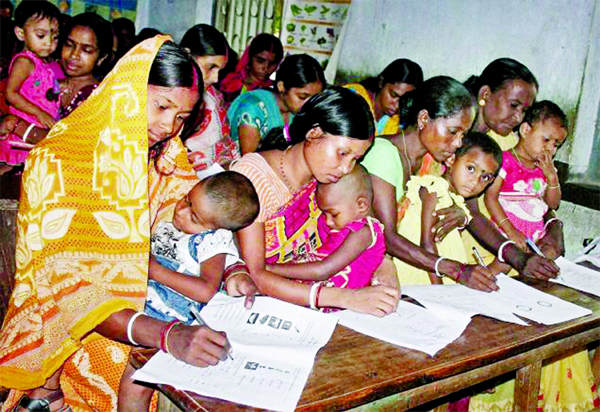 Rifat Zafreen :
Bangladesh has been focused world wide as one of the most efficient countries in bringing development and creating job opportunities for the youth along with empowering women in the country so fast following one of ensuring inclusive the Sustainable Development Goals (SDGs) and equitable quality education and promoting lifelong learning opportunities for all. To have literacy and a sustainable society, achieving the above mentioned declaration is a must. Target 4.6 of SDGs says to ensure achieve literacy and numeracy by all youth and at least by a reasonable percent of adults, both men and women by 2030. Bangladesh has made significant progress in terms of adult literacy and training. The MDGs targets have helped prioritize literacy among women, a socially neglected segment of population, by expanding schooling opportunities for all and for girls especially.
According to UNESCO, female youth literacy jumped from 60 percent to 79 percent between 2000 and 2010 in Bangladesh. Even girls outnumbered boys in primary and level at school though formal schooling is the most critical institution for obtaining literacy skills in rural Bangladesh where many children face obstacles, hardships and challenges regularly.
Globally more than 750 million adults are unable to read and write of which over half of all women are of sub Saharan Africa and South and West Asia while the poorest young women are six times less likely to be able to even read than the richest. In Bangladesh, 66 per cent women are reported to be literate according to the government record.
Loss of literacy is a particular risk for women in the developing countries. Environment in which women can acquire and retain literacy skills is also shaped by various forms of social restrictions and norms. Majority of Bangladeshi women opt to have a life without work. They mostly want to spend most of their lives as homemakers only. This creates such condition where literacy skills can be lost and in turn there creates a new form of vulnerability for them.
Functional illiteracy can undermine the voice and agency among adolescent girls and women, which exposes them to various forms of violence. Early marriage is one of the most focused vulnerabilities for example.
Economic opportunities for women have been increasing in Bangladesh with the expansion of readymade garments industry sector and other work fields. Microfinance schemes of loan giving programs in the rural areas are also empowering women which are giving a set up of micro entrepreneurs for women. But scope of paid jobs for secondary school graduate women is still limited.
In the absence of functional literacy millions of women in Bangladesh are exposed to many forms of violence and insecurity. In addition, Bangladesh cannot sustain the process of social development without functionally literate mothers. Bangladesh government has taken different remarkable initiative to achieve gender equality and women and girls empowerment which is also one of the priority targets of SDGs.
As the country enters the post 2015 era of SDGs, we must ensure our schools should impart literacy skills which will sustain in post school years. This should go with the notion of âlifelong learningâ for all - children, youth and adults irrespective of their level of schooling completed and thus can try to make them empowered and free and thus self dependent.
A huge advancement has been done in the education sector of the country. Programs like free distribution of text books among the children every year; stipend and allowance along with initiative of midday meal at the schools have been initiated. All these programs have paved a successful role towards increase of literacy rate, decrease of inequality in enrolment among boys and girls and gain cent percent achievement in school enrolment. Rate of drop out has come to zero level. Primary school has been established in every village.
As a result, our children do not need to cross miles to reach school anymore. On the very first day of the year new books get reached to their hands. Multimedia classroom has been facilitated for them which have inspired them to get interested in science.
Other than academic education the government has also put emphasis on the spread of technical education also. Vocational schools and technical colleges have been set up in every upzilla and district respectively for creating skilled manpower and scope of job opportunities at home and abroad. This vocational training will play a great role in solving unemployment problem and with this aim the government has built technical and vocational training centers country wide.
In addition, efforts to create jobs for women must go alongside government's initiatives. These initiatives should try to ensure that the rural schools would provide a minimum level of literacy skills which may sustain over time. This can be started with new initiatives targeting women who have graduated from schools but are not economically active, rather constrained at home because of traditional social norms.
ICT access should be explored and exploited at its best to facilitate these women to promote a literacy and reading practice friendly environment though there prevails still a wide range of digital gap in internet usage at the national level not to mention the rural perspective. To meet up this gap, the government is so trying its best to reach internet services and facilities to all, even in the rural areas.
Sustainable development is impossible in the post 2015 era without having improved literacy and inclusive education especially for women. To achieve the SDGs and make it a success; awareness, true will and active participation are needed at their maximum. Our cumulative effort can only make it a success and only thus we can have an ideal country Sonar Bangla very soon.