Fables and Facts in Educational Neuroscience 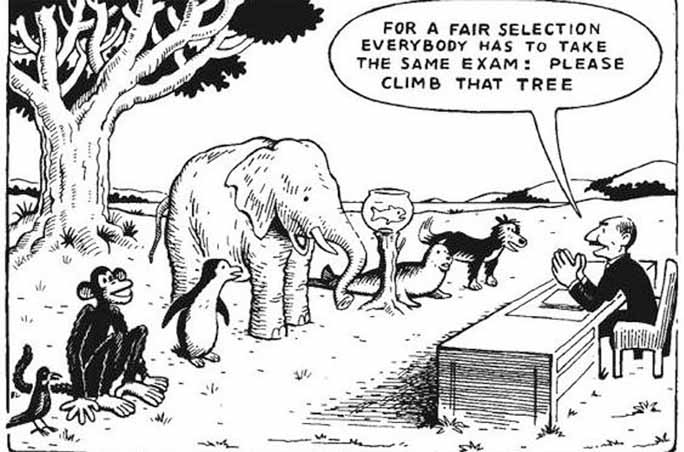 Numerous critics have pointed out that neuroscience has not had much impact on education, and worse yet has spawned a series of harmful myths. The myths arise frequently from well-meaning people who have misunderstood and misapplied the findings of neuros

W. R. Klemm :
In recent years, the growing public concern over deficiencies of schools has led a growing number of educations to embrace neuroscience. Neuroscience is a discipline that integrates anatomy, physiology, psychology, psychiatry, pathology as they relate to function of the nervous system, particularly the brain. In 1969, I was one of 500 charter members of the society that formalized the discipline, the Society for Neuroscience. But only in the last decade has there been much interest in the potential for neuroscience to influence educational policy and practice.
In educational circles, this interest has been expressed with such terms as "brain-based learning," "educational neuroscience," and "neuro-education." The latter term is used for my Linked-in group. Whatever it ends up being called, a new discipline is growing. So far, both good and bad effects are manifest.
Numerous critics have pointed out that neuroscience has not had much impact on education, and worse yet has spawned a series of harmful myths. The myths arise frequently from well-meaning people who have misunderstood and misapplied the findings of neuroscience. Sometimes, the myths come from zealous neuroscientists who make false claims and promises. More often, the myths come from educators who lack scientific training.
A recent review has identified some of the more flagrant myths. Some beliefs are downright foolish and have no research-based evidence. For example, there is the false (and untestable) claim that we only use 10% of our brain. I have no idea where this absurdity arose, but surely it was not from a professional neuroscientist. But one very prominent scientist, whom I do not wish to embarrass, made an outrageous claim that 95% of everything humans do is programmed and that basically we have no free will to improve ourselves or do anything else. I challenge this idea that free will is an illusion in my new book, now in the page-proof stage. The existence of free will is essential for an ability to take personal responsibility and be held accountable for one's beliefs, thoughts, and actions. Belief that free will is an illusion is demotivating, leading children to think they are irredeemable victims of their biology and environment. Neuroscience research clearly establishes that the brain is readily changed by one's choices of experience, thought, and behavior. Freedom to make beneficial choices is empowering.
Another myth, not likely attributable to a scientist, is the claim that the brain shrinks if a child drinks less than six glasses of water each day and that this will cause children to underperform in school.
Such myths have led some critics to charge that neuroscience hype is destructive of sound educational practice. In some cases, that charge is justified. For example, some neuroscientists and educators have believed that children have differing learning styles and that teachers need to adjust teaching to accommodate visual, auditory, and kinesthetic learners. But controlled laboratory studies fail to confirm such biological differences among children. Yet belief in individualized learning styles is still believed by over 93-97% of teachers in five surveyed countries (U.K., China, Netherlands, Turkey, Greece). In those same countries, 71-91% of teachers believe, without evidence, that individual differences among learners are explained by differences in right-brain/left-brain dominance.
Many educators oppose IQ tests, presumably because the score differentials discriminatively label capability. This has given rise to the notion of "multiple intelligences," which is an untestable hypothesis because of the uncontrolled variables involved in defining the types and number of intelligences. There is also a common belief that IQ is fixed and unchangeable, yet evidence to the contrary is abundant.
Another mistaken belief is that the early ages of 0-3 years old are a critical period wherein most brain development occurs. There is no supporting evidence, and a vast amount of evidence shows that the brain is in continual development throughout life, even possible in old age. Brain development and learning capabilities develop at different rates and times in different people.
Nonetheless, a belief in the special importance of pre-K seems to be growing, even though there are indications that some kinds of instruction, such as reading, achieve better success when they are delayed. In Finland, noted for its excellence in education, teaching policy aims at delaying didactic education; "pre-school" education begins at age 6. Their kindergarten day lasts only four hours and is filled mostly with play time and social activities. Teaching of reading may not begin until age 7. Yet, in the U.S., Common Core standards require rigorous language training in kindergarten. There is no evidence that children who are taught to read in kindergarten have any long-term benefit from the early exposure. Likewise, the latest evidence shows that "Head-start" programs have no lasting impact, yet there is great public support for creating pre-Head Start programs.
Two common learning disabilities, ADHD and dyslexia, have been widely studied, both by educators and neuroscientists. Unfortunately, confusion abounds. In the case of ADHD, there is belief that it has to be treated with drugs and that it cannot be reduced by teaching or behavioral therapy. Myths have surrounded dyslexia, ranging from ideas that it does not exist to treatments based on the false notion that it was caused by a visual perception deficit. The real cause seems to be a problem with phonological coding.
As with any new scholarly discipline, a degree of misunderstanding and hype should be expected with educational neuroscience. The proper perspective is to be wary of false prophets and snake oil, but open to the possibility that new knowledge in neuroscience has genuine potential for enriching education practice and outcomes. Research on the biology of memory, reviewed in one of my books, has clear beneficial potential in education that has not been exploited. Better and more informed interdisciplinary collaboration is needed if we wish neuroscience to enrich rather than mislead education. Â

(William Klemm, Ph.D., is a senior professor of Neuroscience at Texas A&M University).