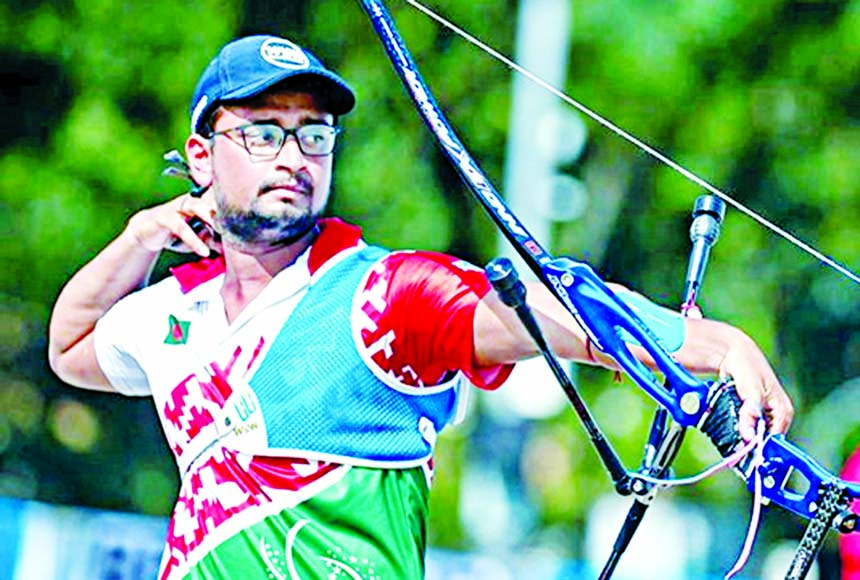 BSS, Pokhara :
Country's famed archer Ruman Sana thinks that winning gold medal will boost up the confidence level to achieve more gold.
He was speaking to the press on Sunday at Pokhara Stadium after archery started the day with gold medal. Bangladesh has won six gold out of six gold medals in the team event of archery.
After winning the gold in the team event, the country's top archer talking to the press today said these gold medals will boost up the confidence level to achieve more gold medals from for the country.
"It was the first gold for archery in the SA games â¦. it's massive achievement â¦.. I have won many international medals but this medal especialâ¦ I would like to thank to the Bangladesh Ansar and VDP, coach and the federation as it would not be possible for us to win gold unless for their bounty support," said the country's top archer.
The confident archer Sana said they have reached all the ten events of the finals and hoped to win more gold for the country.
Sana admitted that it's a credit point for them as strong India did not take part in this discipline otherwise it would be very competitive for them to win medal.
He also expressed gratitude to his coach federation officials and Bangladesh Krira Shikkha Prothisn as unless their support and help archery would not be come in this stage.
Archery coach Martin Frederic, who is happy and delighted with the day's
team results, said it was fruit of total team work â¦. it's a very good job
by the archers.
Asked to comment about his feeling the delighted Bangladesh coach said off course the performance of archers made him happy.
He said they are going through match by match and looking forward more gold in the individual events.
Bangladesh Archery Federation general secretary Kazi Rajib Uddin Ahmed Chapal said the archer made history today and they have been trying hard to take the archery in a new height.
Although the archery federation has been getting support from everywhere, especially sports loving Prime Minister and State Minister for Youth and Sports, who personally keep in touch always with archery.