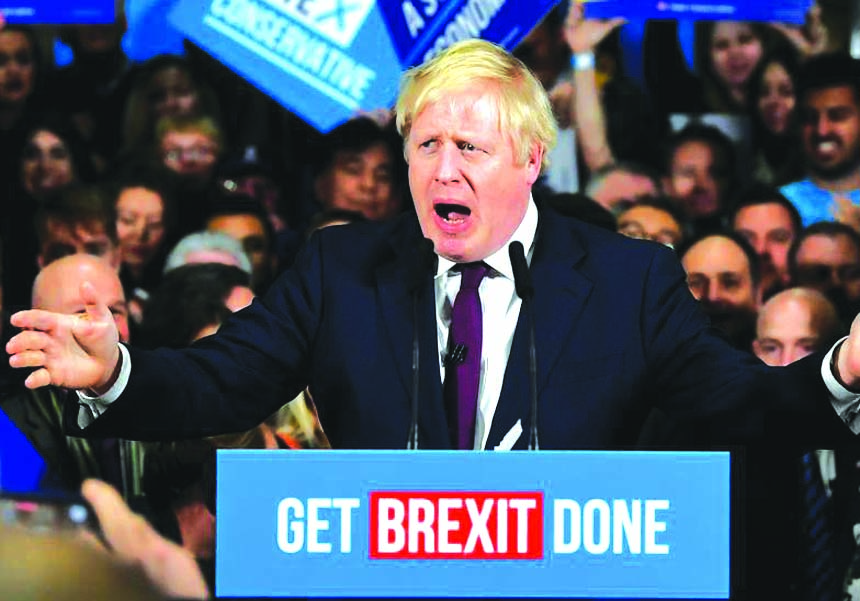 Reuters, London :
Prime Minister Boris Johnson's Conservative Party is on track for a 24-seat majority after Thursday's general election, polling company Focaldata forecast on Tuesday, down sharply from its forecast last month of an 82-seat majority.
Focaldata predicted that the Conservatives would win 337 seats in the 650-seat parliament, followed by Labour on 235, the Scottish National Party with 41, and the Liberal Democrats with 14 based on its forecasting model and recent polling data.
This compares with a previous forecast on Nov. 27 that the Conservatives would win 366 seats, which assumed no tactical voting by supporters of smaller parties and is based on a so-called MRP analytical model.
"Things are incredibly finely balanced. We calculate (around) 67 seats that are incredibly marginal and are essentially too close to call," Focaldata said.
Bloomberg) -- Prime Minister Boris Johnson's lead in Britain's general election was slashed by more than half in a hotly anticipated opinion poll released two days before the vote. The pound fell as much 0.4% on the news.
The Tories will win 339 of the 650 seats in the House of Commons, Labour 231, the Scottish National Party 41, and the Liberal Democrats 15, according to a YouGov forecast on Tuesday.
If the research is accurate, it suggests the race for Number 10 is tightening significantly ahead of Thursday's election. Johnson gambled on an early vote in an attempt to win a majority so he can force his Brexit deal into law and take the U.K. out of the European Union by the end of January.
If Labour continues to close in on the Conservatives, he could fall short of a majority, throwing British politics and the country's future relations with the EU into fresh turmoil.
"The margins are extremely tight and small swings in a small number of seats, perhaps from tactical voting and a continuation of Labour's recent upward trend, means we can't currently rule out a hung Parliament," Chris Curtis, YouGov's Political Research Manager, said in a statement. "As things currently stand, there are 85 seats with a margin of error of 5% or less."
The YouGov research used a technique that more closely predicted the result of the U.K.'s previous election in 2017 than other standard surveys. When smaller parties are included, the result would give the Conservatives a majority of 28 seats. That's smaller than in the previous iteration of the poll two weeks ago, which projected a majority of 68 for Johnson's side.
The YouGov modeling shows Jeremy Corbyn of the main opposition Labour Party a long way short of winning a majority. But if Johnson failed to win a majority, other parties could unite to force him out of office, potentially replacing him with Corbyn, with a mandate to hold another Brexit referendum.
Earlier on Tuesday, Johnson warned activists against complacency. "This is a very, very close-fought election, and we need every vote," Johnson said at a campaign event in Uttoxeter, central England, saying his party is "absolutely not" home and dry.
YouGov, a larger polling company, is due to publish its closely watched final election forecast around 2200 GMT. YouGov's last forecast, also on Nov. 27, predicted a 68-seat majority for Johnson.
Datapraxis, another polling company, forecast a 38-seat majority on Dec. 7.
YouGov adds:Britain's election race has tightened markedly over the past two weeks and Prime Minister Boris Johnson is now likely to win only a modest majority in Thursday's vote, according to a closely watched forecast released on Tuesday.
The 28-seat Conservative margin of victory predicted by pollsters YouGov, down from 68 two weeks ago, is narrow enough that the firm said Johnson could fail to win an outright majority, given the uncertainties inherent to forecasting - an outcome that would prolong Brexit uncertainty.
"Based on the model, we cannot rule out a hung parliament," Anthony Wells, YouGov's director of political research, told The Times newspaper, which published the results.
Johnson called the election to break what he viewed as a deadlock in parliament, where his minority administration had been unable to pass legislation governing Britain's departure from the European Union, which has been delayed until Jan. 31.
Sterling fell sharply after the forecasts appeared, dropping by more than half a cent against the dollar after hitting a seven-month high against the U.S. currency earlier in the day.
"Given the margin for error in this poll, as well as the trend which has shown a clear narrowing of the majority â¦ Thursday's election outcome is far from a foregone conclusion," said David Cheetham, chief market analyst at brokers XTB.
Earlier on Tuesday, a similar forecasting model from a smaller market research company, Focalpoint, showed Johnson on track for a 24-seat majority, down from the majority of 82 seats which it predicted last month.
Many analysts view a 'hung parliament' as the most negative outcome for Britain's economy, at least in the short run, with no party able to resolve the Brexit impasse.
Two weeks ago, YouGov predicted the Conservatives would win 359 seats in Britain's 650-seat parliament, enough to give a comfortable majority of 68, but now it sees the party winning 339, a smaller improvement from its 2017 result of 317.
The main opposition Labour Party are still seen losing ground, but by less than before, and they are forecast to hold on to 231 of the 262 seats they won in 2017. The Scottish National Party and the Liberal Democrats are forecast to gain a handful of seats each.
YouGov's forecasts are based on more than 100,000 interviews with voters over the past week.
The so-called multi-level regression and post-stratification (MRP) modelling approach - which factors in voters' age, gender, education and other variables to predict results in every British voting district - enjoyed success in 2017.
In late May 2017, just over a week before the June 8 election, YouGov's model correctly projected the then Prime Minister Theresa May would lose the Conservative Party's majority, even though she had been ahead in most polls.