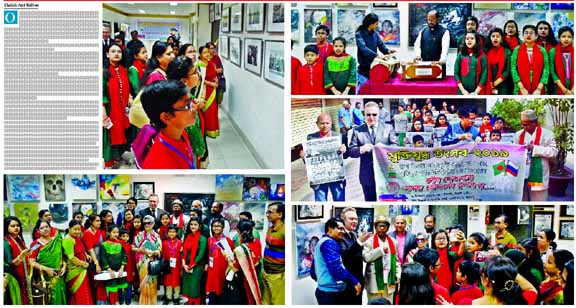 Sheikh Arif Bulbon :
On the occasion of coming Victory Day, celebration of the Liberation War Festival began on December 5, which is jointly organised by the Russian Centre for Science and Culture (RCSC) in Dhaka and the Liberation War Academy Trust. The festival was inaugurated at the RCSC in the capital's Dhanmondi area.Â  Maxim Dobrokhotov, Director of the Russian Centre for Science and Culture in Dhaka, inaugurated the festival as the chief guest in the morning.
Dr Abul Kalam Azad, Chairman of the Liberation War Academy Trust, presided over the ceremony.
The morning begins with a colorful rally titled Immortal Regiment' - concept given by Maxim Dobrokhov, Director of the RCSC. After the rally, in the gallery of the RCSC in Dhaka an exhibition of a variety of historical memorable pictures between Bangladesh and Russia was inaugurated. A total of 200 pictures are put on display in the exhibition.
The inauguration of the exhibition was followed by a discussion session. Maxim Dobrokhotov and Dr Abul Kalam Azad participated in the discussion. Hafizur Rahman Alam, Trustee of the Liberation War Academy Trust, noted poets Kazi Rozi and Anis Mahmud, Secretary of International Affairs, the Liberation War Academy Trust, also took part in the discussion.
During the discussion, Director of the RCSC Maxim Dobrokhotov in his speech said, âOne of the proudest things in Bangladesh is the War of Liberation. The way the Bengali people have sacrificed to liberate language and country is unique in the world. Through this festival we remember those self-sacrificing people.â
Other speakers said that the celebration of the Liberation War Festival is a celebration of the freedom of the new generation to be more beautiful and recognizable. Not only will we have to hear stories from our parents about the War of Liberation, but we need to know learn about the War of Liberation. The unique teachings of the War of Liberation will help us to be great patriotic and beautiful people.
After the discussion, a pleasant cultural event was held. In it, several patriotic songs and recitations were presented by Saptakali, a cultural organisation from old Dhaka. Besides them, poets Kazi Rozi, Aslam Sani, Sujan Hajong, Rokan Johar also recited poems.
The exhibition will remain open at the RCSC Gallery till December 19 daily from 9:00am to 5:00pm (daily), except Friday and Saturday.