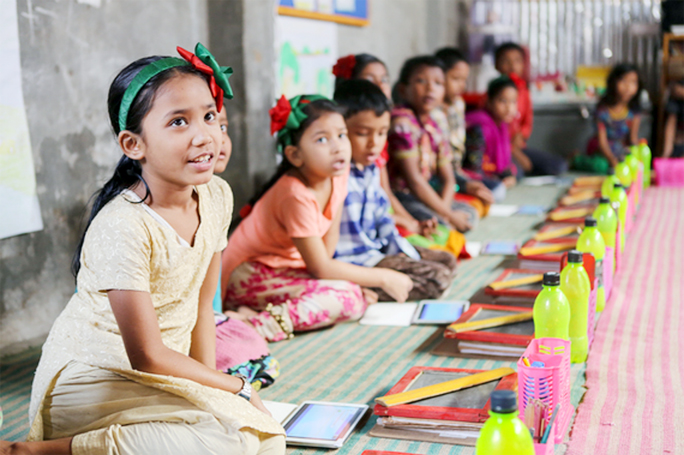 Education policy with special attention at primary education in Bangladesh has always been an issue of much anticipation. All the governments, from the colonial era to the present day have tried to formulate and implement individual education policy that

In the advent of the 50th Birth Anniversary of Bangladesh, which also happens to be the 100th Anniversary of Birth of the Founding Father, Bangabandhu Sheikh Mujibur Rahman, Bangladesh is going to materialize Vision 2021 pertinent for educational development -- building the Digital Bangladesh through extensive use and capacity development in digital technology; creating gainful employment opportunities for at least 90 million skilled workers; and ensuring equal status for women in all spheres of society and the state. all these things would be possible by ensuring quality primary education as it is the cornerstone of subsequent education.
Education policy with special attention at primary education in Bangladesh has always been an issue of much anticipation. All the governments, from the colonial era to the present day have tried to formulate and implement individual education policy that reflect their own ideals and vision regarding the nation's destiny. Approximately one decade ago, Bangladesh got the first education policy that was made open to all for corrective and constructive opinion before final publication. Thus, the national education policy, filled with pledges for reformations and progress, became the true embodiment of the nation's principles and conscience. The key features of the education policy recommendations provide a framework for fulfilling the role of the educational system in the nation's human resource development. Moreover, in this policy one-year pre-primary education was made compulsory.
In recent years, the dropping rate of primary students in the country has reduced by more than half of the previous decade. Among the major steps taken by the Sheikh Hasina's government to prevent students from falling are -- to ensure the admission of catchment area-wise children to each school at the beginning of the year, regular assembly of mother, Close-door meeting, Home visit program, Free distribution of books to students at the first day of the year, School feeding program, initiation of pre-primary education. Moreover, government has been prohibited corporal punishment in all kind of institutions and teachers who physically torture the students were taken under legal procedure. Moreover, government has ensured satisfactory remuneration, incentives and training for assuring quality education and preventing both teachers and students from spending time and energy in coaching centers. Besides these, there are many other commendable steps regarding increasing scholarships, ensuring gender parity in the institutions and strategies to increase literacy, vocational education and non-formal education. The most laudable initiative by Prime Minister Sheikh Hasina is the stipend distribution among 1 corer 30 lakh mothers of primary students through mobile banking.In addition, government has ensured stipends for girls, removing criminal violence and session-jam from education institutions, making IT instruction compulsory in secondary schools, building new schools and improving existing ones in the capital city and districts and has planned for construction of vocational institutes in each upazila in phases.
The government is aiming to increase primary school attendance, and reduce the dropout rates in primary schools with the new meal policy. Around 14 million primary school students across Bangladesh will get midday meals by 2023 under the National School Meal Policy 2019. Under the government program, students aged between 3 and 12 years will be provided with food that will meet at least 30% of their daily calorie requirement, and 50% of daily micronutrient requirements. School meals draw students into their classes. The attendance and the physical growth of the children are much better than the schools without midday meal. It is helping to reduce dropout rates. Under school feeding policy, all primary schools will be brought under midday meal coverage for enhancing quality of education alongside improving nutritional status of children. Nutritious meals for school children have a high return on investment, as they improve children's health, and productivity throughout their life. As many as 14 million students from 66,000 government primary schools across the country will be provided with midday meals by 2023.The dropout rates will decline further with the program, particularly in poverty-prone areas.
To recapitulate, primary education is paving the way for achieving sustainable development goals and making Bangladesh as a prosperous and developed nation. By ensuring quality primary education as it the cornerstone of subsequent education, Bangladesh will be able create huge potentiality to meet all the challenges of attaining SDGs and Vision 2041.