Neglected in his own district's highest educational institute 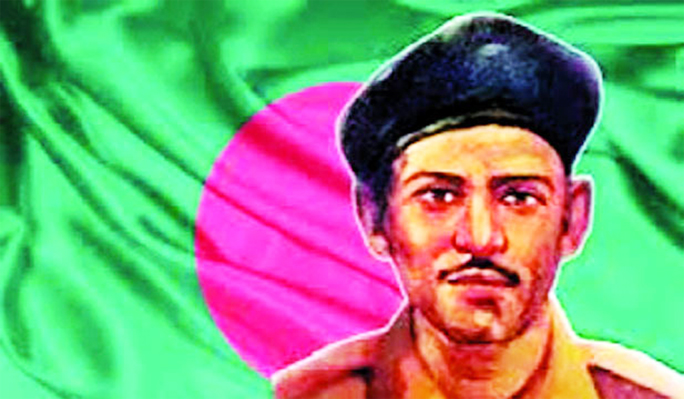 But, sadly, the truth is that the national hero remained neglected in his district. One of the public institutes in the country is the Noakhali University of Science and Technology (NUST), known as the Oxford of coastal, neglected Birshrestha Ruhul Amin J

Ohi Alam :
'Birshrestha' - the Bangladesh's highest honor was given for heroism in the battle field of the Liberation War in 1971. The medal was given in recognition of the heroic freedom fighters who had shown unparalleled courage and sacrificed their lives on the battlefield during the Liberation War. The medal has been given to seven freedom fighters in the Bangladesh Liberation War.
Engine Room Artificer Mohammad Ruhul Amin is a Birshrestha of Bangladesh. He was killed when he took an attempt to save 'Palash' of the Bangladesh Navy's gunboat during the Liberation War on December 10, 1971.
He was born in a very ordinary family in the village of Baghpanchara in Sonimuri Upazila of the Noakhali district. His father is Azhar Patwari and his mother's name is Julekha Khatun. After completing his studies in the area, he joined the Pakistan Navy as a junior mechanical engineer. In 1971, Ruhul Amin was working in Chittagong. He went out of the boat to liberate the country and joined the War of Liberation. He also participated in various ground war operations. Later, the Bangladesh Navy was formed by bringing members of the Navy together from different sectors and sub-sectors. And Mohammed Ruhul Amin took over as artificer in the main engine room of Gunboat 'Palash'.
But, sadly, the truth is that the national hero remained neglected in his district. One of the public institutes in the country is the Noakhali University of Science and Technology (NUST), known as the Oxford of coastal, neglected Birshrestha Ruhul Amin Just like the entire district.
Thousands of students are enrolled in this university every year after its establishment. Most of the students do not know that there is a hero in Noakhali! It is a matter of great shame and regret.
One of the reasons behind the students not knowing this is that there is no memorial pillar in the name of Birshrestha Ruhul Amin at this university. Nor is the name of this heroic son of the nation found in any hall, building or sculpture of the university.
The university has several buildings, academic buildings, libraries, and five residential halls. The only auditorium of the university was also named after the father of the local MP.
One student who did not want to be named said, "Although the administration of the university uttered a lot about freedom fighters in speech, the sad thing is the question of how much the freedom fighter is remembered from the heart."
As a former student and teacher of the university, AQM Salauddin Pathan said, "One of the greatest martyrs, Muhammad Ruhul Amin, was outstanding for his outstanding contribution to the Great War. A monument was erected at Rupsa Parade and a stadium at Chittagong, with a special honoring this noble son of Noakhali. At the NUST, a special structure or laboratory should be set up here in his name to know more about this great son of the nation. The practice of heroic memories will interest the young people for the highest sacrifice for this country and will help to build a better country by reducing corruption. I believe. "
Sabrina Yasmin, a third-year student of Bangladesh and the War of Liberation Studies, said, "In our university where a department of the War of Liberation has been opened, many people of this generation do not know the great Ruhul Amin, but to inform the new generation about the history of the War of Liberation in this regard, I think there should be a building or a monument in his name in recognition of his contribution where students learn about him, his leaving will grow the love for the country.
Talking to the family of Birshrestha Ruhul Amin, his grandson Sohail Chowdhury said, "The name of the university was to be named after Birshrestha Ruhul Amin. But it did not happen in the then political mischief. We have no regrets about this. , The nation will find these names exactly for their own identity, for their own history. "
The newly appointed (five months) Vice-Chancellor Prof Dr Md. Didar-ul-Alam, said, "As a citizen of an independent country, such a thing should not be done at the University of that District, in the district where he was born. It is a big failure of ours. No one mentions the topic before.Â  Now when the matter comes to me, I'll work on it. "
Various members of the university organization and ordinary students have been demanding the matter for a long time. Therefore, all hopes and demands are now on the new administration of the university. The initiative to commemorate a monument or building should be named after Birshrestha Ruhul Amin, the great son of the nation.

(Ohi Alam is a student, Noakhali University of Science and Technology).