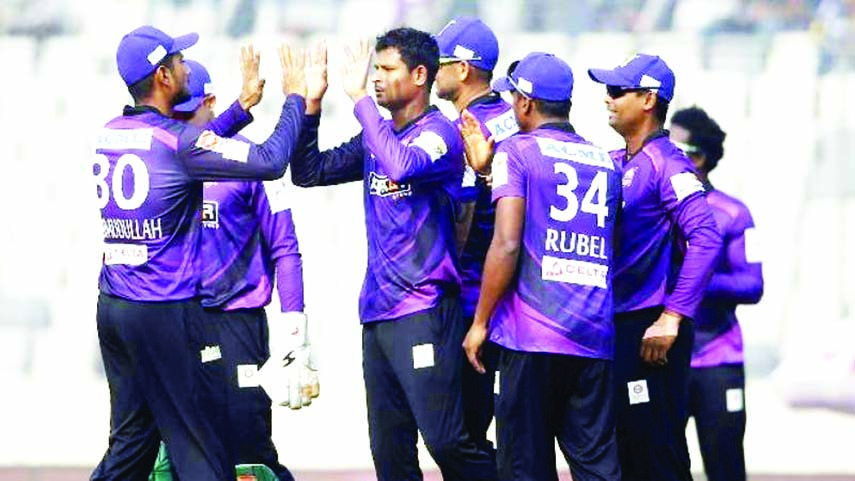 Players of Chattogram Challengers, celebrating after dismissal of a wicket of Dhaka Platoon in their Eliminator phase of the Twenty20 cricket match of the Bangabandhu Bangladesh Premier League at the Sher-e-Bangla National Cricket Stadium in the city\'s M

Sports Reporter :
Dhaka Platoon were eliminated from the Bangabandhu Bangladesh Premier League (BBPL) as they lost to Chattogram Challengers by seven wickets in the Eliminator phase of their Twenty20 cricket match at the Sher-e-Bangla National Cricket Stadium in the city's Mirpur on Monday.
Chasing Dhaka Platoon's 144 runs for the loss of eight wickets in the stipulated 20 overs, Chattogram Challengers coasted home making 147 for the loss of three wickets when they had 14 balls to spare.
Chattogram Challengers made a solid start as openers Chris Gayle and Ziaur Rahman contributed together 42 runs in the opening stand before Ziaur Rahman was stumped out by wicketkeeper Anamul Haque off Mahedi Hasan.
After Ziaur Rahman's dismissal, Chris Gayle and Imrul Kayes put on together 49 runs for the second wicket partnership before Imrul Kayes was caught by Thisara Perera off Shadab Khan when Chattogram's total was 91 for the loss of two wickets.
After Imrul's departure, Chris Gayle could stay at the crease for a short period as he was caught by Mashrafe Bin Mortaza off Shadab Khan when Chattogram's score was 102 for the loss of three wickets.
Gayle hit the team's highest of 38. His 49-ball knock saw two sixes and a four.
Imrul Kayes made 32. His 22-ball innings was belted with three sixes and a four. Later, Mahmudullah Riyad and Chadwick Walton guided their team to overhaul the winning target adding together 45 runs for the unbroken fourth wicket partnership.
Mahmudullah remained unbeaten with 34. His 14-ball superb innings was studded with four sixes.
Opener Ziaur Rahman scored 25 from 12 deliveries with two sixes and three fours.
Walton remained unbeaten with 12 runs. Shadab Khan got two wickets conceding 32 runs, while Mahedi Hasan took one wicket for 20 runs.
Dhaka Platoon faced disaster as they lost their early seven wickets for 60 runs.
Then Shadab Khan and Thisara Perera built a notable partnership. They contributed 44 runs in the eight-wicket stand before Thisara Perera was caught by Ziaur Rahman off Rubel Hossain when Dhaka Platoon's score was 104 for the loss of eight wickets.
Then Shadab Khan and Mashrafe Bin Mortaza added 40 runs in the unbroken ninth wicket stand before Dhaka Platoon's innings came to an end.
Shadab Khan remained unbeaten with 64. His 41-ball plucky innings was ornamented with three sixes and five fours.
Earlier, opener Mominul Haque hit a run-a-ball 31 including three fours and a sixer.
Thisara Perera made 25 from 13 balls featuring three fours and a sixer.
Rayad Emrit of Chattogram Challengers captured three wickets at the cost of 23 runs. He was adjudged the Man of the Match.
Nasum Ahmed and Rubel Hossain bagged a pair of wickets each instead of 11 and 33 runs respectively.
Besides, Mahmudullah Riyad picked up one wicket for five runs.