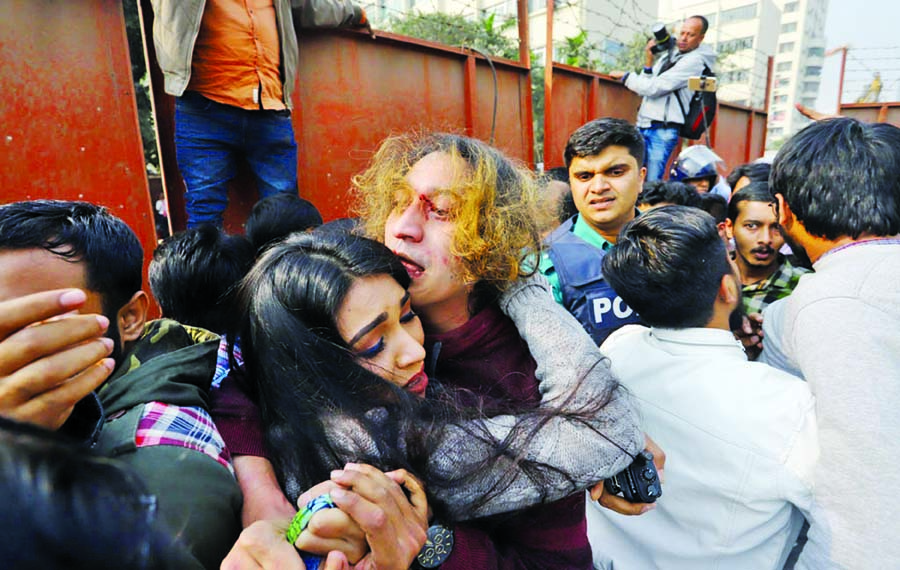 A scuffle broke out at Shahbagh intersection during blockade programme by a section of DU students when a man pointed a gun at them, then he was beaten up by protesters and handed over to police on Wednesday.

A man has been beaten by a mob after he pulled a revolver on protesters amid a demonstration staged by Dhaka University students blocking Shahbagh streets demanding a review of city polls day.
The man, Alif Rushdi Hasan, 45, was sent to hospital for treatment after interrogation at a police station, SM Shamim, a senior assistant commissioner of Dhaka Metropolitan Police, told bdnews24.com.
A man is beaten by a mob after pulling a gun at protesters at Shahbagh intersection on Wednesday during demonstration demanding that the date of Dhaka city polls be changed for Saraswati Puja. Photo: Asif Mahmud Ove
Son of Mosleh Uddin from the capital's Sutrapur, Alif is a businessman residing in Dubai, according to police.
The revolver and a shotgun, which was also found in his car, were licenced, police said.
Alif and the protesters started an altercation after he demanded that the demonstrators let his car pass by. His wife and children were in the car.
The protesters got angry and beat him up when he pulled the gun at one stage of the altercation. Police rescued him later.