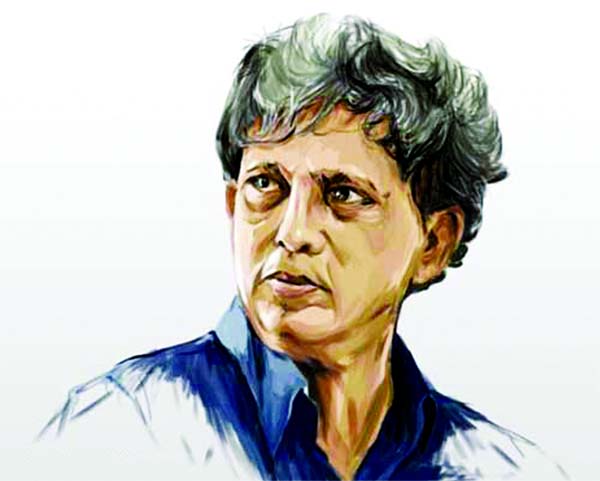 Saymon Zakaria :
Selim Al Deen (1949-2008), playwright, teacher, was born on 18 August, 1949 in the village Senerkhil under coastal Sonagazi upazila, Feni.
His father Mofizuddin Ahmed was a Deputy Superintendent of Customs. His motherâs name was Firoza Khatun.
Selim Al Deen passed SSC examination in 1964 from Mangalkandi Secondary School of Senerkhil village and HSC in 1966 from Feni College. He got admitted to first year BA Honours of the Bangla department of Dhaka University in 1967. After studying up to second year, he shifted to Karatia Saadat University College in Tangail due to political reasons and obtained graduation from there. He then obtained MA in Bangla literature from the University of Dhaka. He obtained PhD degree from the Jahangirnagar University in 1995 for his dissertation on 'Bengali drama in mediaeval Bengal'.
He started his career joining as a copywriter of Bitopi Advertisement Agency. In 1974 he joined as a lecturer in the Bangla department of Jahangirnagar University. He joined Department of Drama and Dramatics in 1986 and discharged the responsibility of its founder chairman. Alongside teaching, he and Playwright Nasiruddin Yusuff built up Bangladesh Gram Theatre (1981-82) with the goal of developing the country's drama industry in line with its global trend.
He has enriched his plays by incorporating the diverse working classes, professionals, social life of small ethnic communities living in Bangladesh and their age-old culture. Although he established himself as an eminent Playwright he actively tried to introduce a new non-generic art trend in contemporary global art setting. It should be noted that apart from his identity as a Playwright, he was a University Teacher, Researcher, Organizer, and Director of Dramas and Art Theorist. After 1973, he founded the Dhaka Theatre and Bangladesh Gram Theatre along with others. He could give life to his wide repertoire of experimental plays and theories mainly through the organisational setup of Dhaka Theatre. He wrote in many of his articles that he was a dualist in artistic ideology. Actually, he introduced a new trend in Bangla literature by denying all divisions of Western art in the light of thousand-year old outlook of the Bangalis.
He did not limit himself to merely writing plays. He wrote numerous research articles based on Drama. He could also sketch a clear outline and structure of the thousand-year old history of Bangla Drama and wrote Modhya-juger Bangla Natyo in 1996. He wrote Bangla Natyakosh, an encyclopedia of Bangla drama and also contented the leakage of encyclopedia of Bangla Natyakosh. He discharged the responsibility of Editor of the research journal on Dramatics titled Theatre Studies. Besides, he translated and edited the book Nondikeshworer Obhinoy Dorpon (1982). His other literary works; poetry Kobi O Timi (1990); novel Omrito Upakhyan (2005). All his creative works have been published in five volumes under the title Selim Al Deen Rachanasamagra (2005-2011). His play Hargaz has been translated into the Swedish language and was staged by the Rongokormi Drama group of India in Hindi language. His plays have been included in the curricula of different universities.
Though Selimâs writing career started from early age, his first article was published in the literature page of Dainik Pakistan (edited by Ahsan Habib) in 1968, based on the black people of America. His first Radio play Biporit Tomosay was broadcast in 1969 and TV play titled Librium (changed name Ghum Nei) was telecast in 1970 with Atiqul Haque Chowdhury as the Producer. His first stage-drama titled Sorpo Bisoyok Golpo, directed by Amirul Haque Chowdhury and produced by Bohubochon was staged in 1972. After that, his plays created on the basis of newer themes and perspectives, resonated from the stages and Television of Bangladesh one after another. His notable books on drama: Sorpo Bishoyok Golpo O Onyanyo Natok (1973), Jaundice O Bibidho Balloon (1975), Boson (1985), three stage theatre: Muntasir, Shokuntala and Kittonkhola (1986), Keramotmongol (1988), Prachyo (1998), Kittonkhola (1989), Hat-Hadai (1997), Joiboti Konyar Mon (1993), Chaka (1991), Haragaz (1992), Ekti Marma Rupkotha (1995), Bonopangshul (1996), Nimojjon (2002), Dhaboman, Sworno-boal (2007), Usha Utshab O Swopno-romonigon (dance drama, 2007), Putro (2008) etc.
Alongside drama and research-oriented writings, he also showed his skill in composing TV-plays, dialogue of Films and direction of Stage Theatre. Some films were based on the stories of his plays. For example, film-maker Morshedul Islam was made a film in 1994 based on Chaka and Abu Sayeed in 2001 on Kittonkhola.
Natyacharya Selim Al Deen was an exponent of dualistic dualism theory of Art, the fusion theory, and new ethnic theory. Because of his extraordinary contributions to Bangla Drama, he was accorded receptions and awarded Prizes including National Awards at home and abroad.
Notable Prizes: Bangla Academy Literary Prize (1984), National Film Award (1996), Nandikar Purashkar (Academy Mancha, Kolkata, 1994), Best Television Dramatist (Tenashinash Purashkar, 1994), Khalekdad Literary Prize, National Film Award (Ekattorer Jishu, best dialogue, 1994), Ekushey Padak (2007), Alakta Sahitya Purashkar (2007).Â  He breathed his last on 14th January 2008.