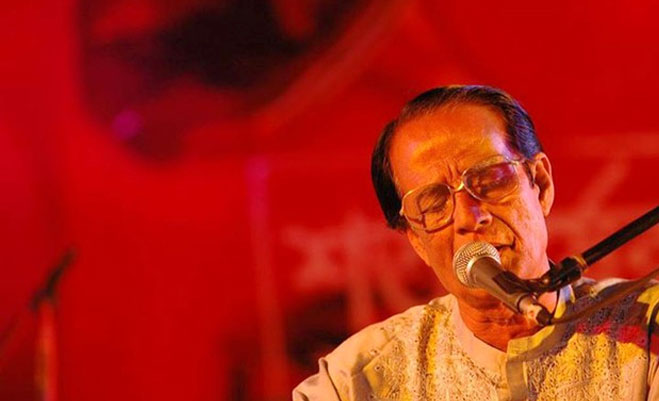 Pandit Ramkani Das, an Ekushey Padak recipient and folk and classical music maestro, died at a city hospital Friday night at the age of 79.
Ramkanai breathed his last in the intensive care unit (ICU) of neurosurgery department of Metropolitan Hospital in the city's Mohakhali area 11:15pm on Friday.
He suffered a massive haemorrhage at his Sylhet residence on August 26 and was admitted to a local hospital. He was brought to Dhaka the next day. On Aug 30, he underwent a brain surgery.
Ramkanai Das, born in Sunamganj in 1935, was awarded the Ekushey Padak, one of the highest civilian award in Bangladesh, in 2014 by the government for his outstanding contribution to the folk song collection. His parents were also folk singers.
Besides singing, he wrote lyrics and composed songs. Since his regular featuring at a radio station in Sylhet on 1967, some of his notable audio albums include Bondher Banshi Baje (2004), Shurodhhonir Kinarai (2005), Raganjali (2006),
Oshomoye Dhorlam Pari (2006), and Pagla Majhee (2010). He joined Bangladesh Betar's Sylhet station in 1967.
His book on classical music - 'Saral Sangeet Sikkha' - was published in 2007.
Apart from Ekushey Padak, Das received at least 200 other awards and honours including honorary fellowship of Bangla Academy in 2012 and Rabindra Padak in 2000.
After his death, Cultural Minister Asaduzzaman Noor visited him at the hospital and expressed deep shock over the death.
Meanwhile, the dead body of the noted folk singer was kept at the Central Shaheed Minar at Sylhet for paying rich tribute by the people of all strata.
Then the body of the late singer would be taken to his village home at Dirai under Sunamganj for funeral.