Does it really help us learn? 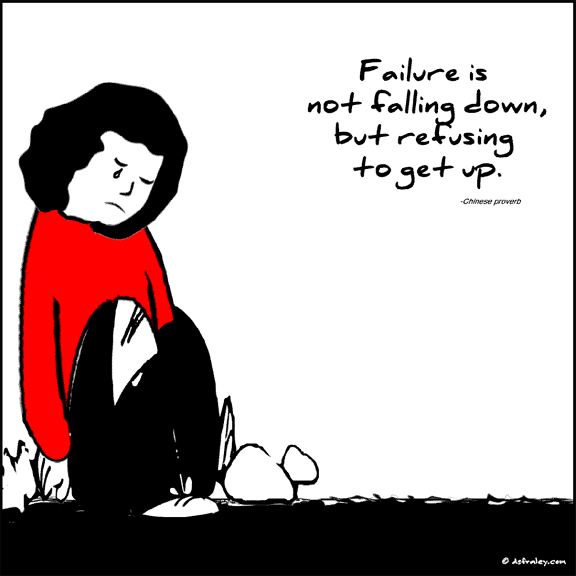 Nick Morgan, Ph.D :
Failure is fashionable.Â  It's a poor conference or meeting that doesn't have someone celebrating the delights of failure and its improving lessons.Â  "Fail Fast" is a popular business mantra, and many a startup CEO or high-tech wunderkind routinely encourage their employees to not only fail but as fast as they can.
But does failure actually deliver as promised?Â  Do we learn from it, more powerfully than we do from success?Â  Does failure offer us essential lessons about life and success next time?
Two recent studies offer apparently contradictory advice on the subject of the uses of failure.Â  One study found that people fail to learn at all from their failures.Â  In fact, according to this study, people learn better from their successes - a deeply shocking finding for the fans of failure everywhere.Â  The study was an analysis of five separate studies, covering a total of 1,674 people taking simple binary tests, and the results were clear:Â  even with incentives, people failed to learn from failure, in fact making the same mistakes over and over again. Â
The study's lead researcher says that "it's a matter of self-esteem.Â  It doesn't feel good to fail, so people tune out."
The study did find, however, that people can learn from watching other people make mistakes - but no better than watching other people succeed.Â  But this idea suggests that if we generalize the idea of failure to include an entire team, then perhaps the team can learn from watching each other fail.
In the second study, the researchers found that too much failure was discouraging, and too little wasn't salubrious enough.Â  There is an optimal 'Goldilocks' level of failure that leads to optimal results.Â  That turns out to be failing about 15 percent of the time.
That's fairly easy to calculate on the sorts of standardized tests these studies use, but not so easy to optimize for teams in the workplace.Â  What would it mean to fail 15 percent of the time on a year-long product launch?Â  Or for a marketing push?Â  Or even for a sales team that has large long-term contracts to negotiate?
In the political realm, it's an even more difficult calculation.Â  How can a presidential election campaign team figure out what a 15 percent failure rate looks like?Â  In politics, just as in many kinds of sales situations, failure is a binary condition - you either fail or you succeed.Â  There's no middle ground.
Nonetheless, the best learning from mistakes does seem intuitively to fall in that middle area between too easy - never making mistakes - and too hard - failing constantly.Â  We can immediately see that neither of these situations would lead to optimal learning.
Overall, then, these two studies are a useful check on the over-enthusiastic embrace of failure in the business world.Â  There does seem to be a role for failure, at least in structured learning situations, where the price of failure is relatively low and recovery fairly rapid.Â  But it's a good reminder that our humanity is crucial to the way we react to and learn from failure and that the delights and uses of failure can be overstated.Â  Failure may be fashionable, and a good learning experience in the long run, but it remains a bitter pill to swallow for most of our fellow human beings.

(Nick Morgan, Ph.D., is president of Public Words Inc., a communications consulting company, and the author of books including Can You Hear Me?: How to Connect with People in a Virtual World).