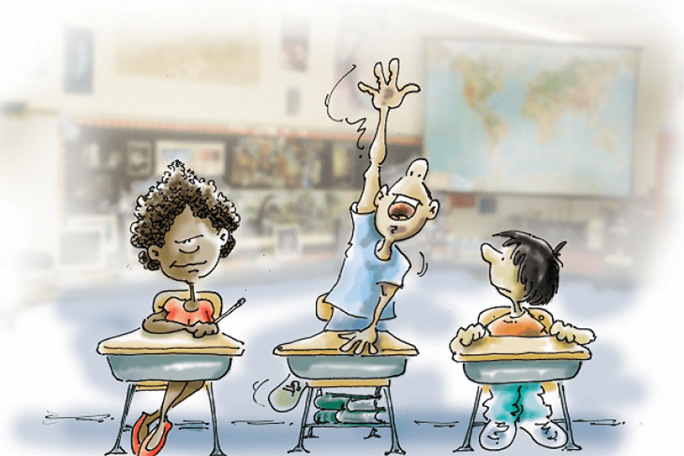 Centuries ago, in ancient Greece, Aristotle (384-322 BC) appears to have understood the importance of moving the body while learning. Instead of having his students (such as Plato) sit still during classes at the Lyceum, Aristotle preferred to teach his

Christopher Bergland :
School-age children who perform short bursts of physical activity during class-such as jumping jacks, star jumps, or jogging in place-do better academically than their sedentary peers, according to a new international review and meta-analysis.
Emma Norris of University College London led this research in collaboration with an interdisciplinary team of colleagues. The findings were published on October 16 in the British Journal of Sports Medicine.
According to the authors, "This review provides the first meta-analysis of the impact of physically active lessons on lesson-time and overall physical activity (PA), as well as health, cognition, and educational outcomes."
About half of the 42 studies reviewed for this meta-analysis took place in the United States. Other studies on the benefits associated with incorporating physical activity into academic learning for pupils ranging from three-to-14 years of age were conducted in Australia, China, Croatia, Ireland, Israel, the Netherlands, Portugal, Sweden, and the UK.
In-class physical exercise programs are a win-win for students and educators because these activities facilitate better academic performance without reducing the amount of time spent learning in the classroom.
The main takeaway of this meta-analysis is that weaving physical activity into school lessons is linked to better test scores than having students sit still through an entire class. After reviewing data from dozens of studies that involved 12,633 school-age children, the researchers conclude that "incorporating physical activity had a large, significant effect on educational outcomes during the lesson, assessed through tests or by observing pupils' attention to a given task."
In a news release, lead author Emma Norris of the UCL Centre for Behaviour Change said, "The biggest contributor of sedentary time in children's lives is the seven or eight hours a day they spend in classrooms. Our study shows that physically active lessons are a useful addition to the curriculum. They can create a memorable learning experience, helping children to learn more effectively."
Co-author Tommy van Steen of Leiden University in the Netherlands added, "These improvements in physical activity levels and educational outcomes are the result of quite basic physical exercises. Teachers can easily incorporate these physically active lessons into the existing curriculum to improve the learning experience of students."
In the paper's conclusion, the authors write: "In elementary and preschool settings, when physically active lessons were added into the curriculum they had positive impact on both physical activity and educational outcomes. These findings support policy initiatives encouraging the incorporation of physically active lessons into teaching in elementary and preschool settings."
Aristotle Was Right: Peripatetic Learning Helps the Brain Absorb Information
Centuries ago, in ancient Greece, Aristotle (384-322 BC) appears to have understood the importance of moving the body while learning. Instead of having his students (such as Plato) sit still during classes at the Lyceum, Aristotle preferred to teach his classes while everyone was walking.
The Lyceum was a Peripatetic School. "Peripatetic" is derived from the ancient Greek word peripatetikÃ³s which means "walking" or "given to walking about."
Like many exuberant and energetic young kids, I was constantly being told to "Sit down and stop moving!" by my K-5 teachers. At the time, my school had individual desk-chair combos that required students to slide into their seats from a side angle and remain motionless in a constricted stationary position during the entire class. To me, these claustrophobic desk-chairs were like a medieval torture device specifically designed to make it impossible to move and felt like being trapped in a straight-jacket. My response to being physically constrained was to daydream and tune out the droning voice of any authoritarian teacher by adding Charlie Brown-inspired sound effects to his or her voice. Watching the cartoon clip (above) reminds me of how it felt to be forced to sit still during elementary school back in the early-1970s, and how little I actually learned in this type of "anti-peripatetic" teaching environment.
Luckily, in the late-1970s, when I was in seventh grade, my family moved to Brookline, Massachusetts, and I enrolled at The Park School, which is a private day school just outside of Boston. Students at Park weren't forced to sit still all the time; we were encouraged to move our bodies and spend lots of time outside exploring nature as part of our curriculum.
Park School's headmaster during this era, Bob Hurlbut, Jr., was a visionary who promoted a "boundary-less" education and worked with the school's architects to design classrooms without walls. Much like the Lyceum, Park's 34-acre campus has an "Outdoor Learning Garden" and is surrounded by green spaces filled with walkways, gymnasiums, a swimming pool, and playing fields.
Of course, private schools are expensive and unaffordable for many families. Therefore, it's imperative that policymakers at the local, state, and federal level understand the importance of committing public school resources to more "peripatetic-inspired" learning.
Over the past few years, dozens of studies have shown that physical activity and incorporating full-body movements into classroom learning helps kids stay focused, retain information, and score higher on tests. The latest meta-analysis by Norris et al. (2019) provides a one-stop reference for empirical evidence which reaffirms the importance of physically active lessons in the classroom.
Hopefully, the days of forcing kids to sit still while learning academic material are over. In addition to encouraging physical exercise before/after school and during recess, adding short bursts of physically active lessons in the classroom appears to facilitate better learning.
(Christopher Bergland is a world-class endurance athlete, coach, author, and political activist).