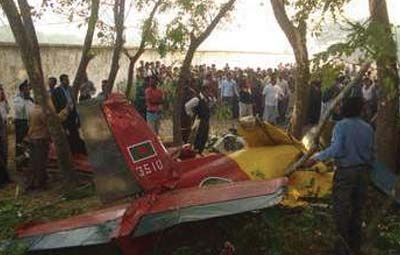 A trainer aircraft of the Bangladesh Air Force (BAF) pulled off an emergency landing at a village near the Jessore airport on Thursday. The PT-6 training plane landed on a paddy field in Maidi village around 11.30 am while it was on a regular flying mission, said a statement from the Inter Servicer Public Relations Directorate (ISPRD). The 2 pilots managed to come out safely from the aircraft. Immediately after the incident, they were brought to BAF Base in Jessore, the statement said. It was not clear whether the aircraft had suffered damage or not. Jessore Kotowali Police Station OC Emdadul Haque Sheikh said that one of wings of the aircraft has been slightly damaged.