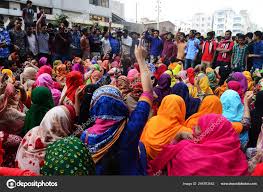 Staff Reporter: Apparel Workers blocked a road in Dhaka's Tejgaon areas after a factory sacked 80 employees before shutting down on Wednesday morning.
Protesting workers of Kaniz Garments Ltd demanded immediate withdrwal of the sacked emplyees.To press home their demand, the workers have occupied both ends of the Nabisco intersection at 9:30am.
Moinul Islam, Assistant Commissioner of DMP's Tejgaon industrial zone, said, the blockade caused a massive gridlock stretching from Mohakhali to Satrasta.
The disgruntled workers alleged that they had been denied entry to the factory over the past three days following their protests against the layoffs.
Traffic resumed after police arrived on the spot around 10:45m and ushered the workers to one side of the road, the DMP official said.