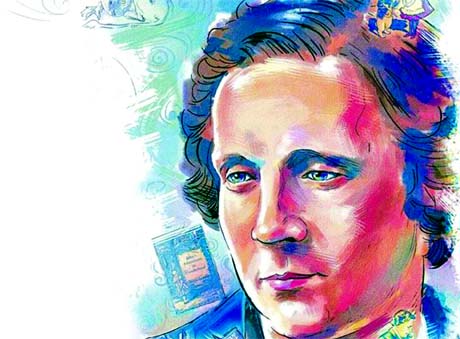 Literature Desk :
Lewis Carroll (1832-1898) was the pen name of Charles L Dodgson, author of the childrenâs classics Alice's Adventures in Wonderland and Through the Looking-Glass.
Lewis Carroll was an English fiction writer who wrote and created games as a child. At age 20, he received a studentship at Christ Church and was appointed a lecturer in Mathematics. Carroll was shy but enjoyed creating stories for children. His most famous books include Aliceâs Adventures in Wonderland and Through the Looking-Glass.
Charles Lutwidge Dodgson, best known by his pseudonym, Lewis Carroll, was born in the village of Daresbury, England, on January 27, 1832. The eldest boy in a family of 11 children, Carroll was rather adept at entertaining himself and his siblings. His father, a clergyman, raised them in the rectory. As a boy, Carroll excelled in Mathematics and won many academic prizes. At age 20, he was awarded a studentship (called a scholarship in other colleges) to Christ College. Apart from serving as a lecturer in Mathematics, he was an avid photographer and wrote essays, political pamphlets and poetry. The Hunting of the Snark displays his wonderful ability in the genre of literary nonsense.
Aliceâs Adventures in Wonderland and literary success
Carroll suffered from a bad stammer, but he found himself vocally fluent when speaking with children. The relationships he had with young people in his adult years are of great interest, as they undoubtedly inspired his best-known writings and have been a point of disturbing speculation over the years. Carroll loved to entertain children, and it was Alice, the daughter of Henry George Liddell, who can be credited with his pinnacle inspiration. Alice Liddell remembers spending many hours with Carroll, sitting on his couch while he told fantastic tales of dream worlds. During an afternoon picnic with Alice and her two sisters, Carroll told the first iteration of what would later become Aliceâs Adventures in Wonderland. When Alice arrived home, she exclaimed that he must write the story down for her.
He fulfilled the small girl's request, and through a series of coincidences, the story fell into the hands of the novelist Henry Kingsley, who urged Carroll to publish it.
The book Aliceâs Adventures in Wonderland was released in 1865. It gained steady popularity, and as a result, Carroll wrote the sequel, Through the Looking-Glass and What Alice Found There (1871). By the time of his death, Alice had become the most popular childrenâs book in England, and by 1932, it was one of the most popular in the world.
Photography and legacy
Besides writing, Carroll created a number of fine photographs. His notable portraits include those of the actress Ellen Terry and the poet Alfred Tennyson. He also photographed children in every possible costume and situation, eventually making nude studies of them. Despite conjecture, little real evidence of child abuse can be brought against him. Shortly before his 66th birthday, Carroll caught a severe case of influenza, which led to pneumonia. He died on January 14, 1898, leaving an enigma behind him.