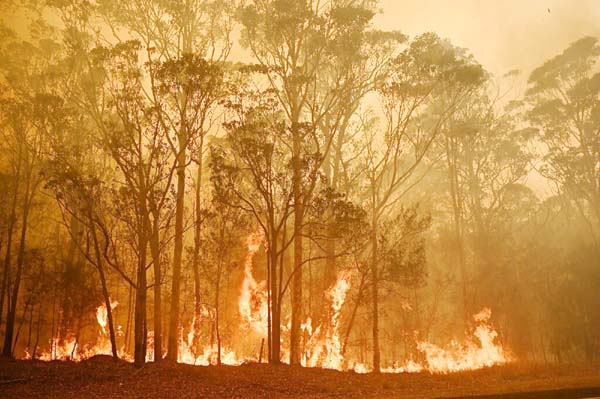 Bushfires that tore through Australia affected three quarters of the population in some way, a new poll shows.

Three in four Australians - almost 18 million people - were affected by the crises deadly bushfire crises, according to a survey released Tuesday that also pointed to plummeting support for the government and for coal projects.
The Australian National University study showed the vast human scale of the five-month crises, which killed more than 30 people and destroyed thousands of homes.
"Nearly every Australian has been touched by these fires and many of us will be living with the effects for years and years to come," said lead social researcher Nicholas Biddle said.
The poll of 3,000 people indicated that 14 percent of the adult population was directly affected - with their homes lost or damaged, or families forced to evacuate.
Those nearly three million people were eclipsed by a further 15 million Australians who had indirect exposure, including being affected by bushfire smoke or having holiday plans hit.
The scale of the impact shocked researchers and will be cause for concern in Canberra, where the government has struggled to shake public perception that it botched the crises response and cares little for addressing climate change.
Scientists say the fires were fuelled by drought and unfavourable weather conditions that were exacerbated by climate change.
Prime Minister Scott Morrison was criticised for going on holiday to Hawaii in the middle of the disaster and refusing to rule out deeper cuts to carbon emissions.
"Only 27 per cent of respondents reported that they were confident or very confident in the government," said Biddle, a drop of 11 percentage points in three months.
"This is one of the largest declines in confidence I have seen in such a short period of time," he said.
Among people who voted for the government at the last election, support for building new coal mines plummeted from 72 percent before the crisis to 57 percent in January.