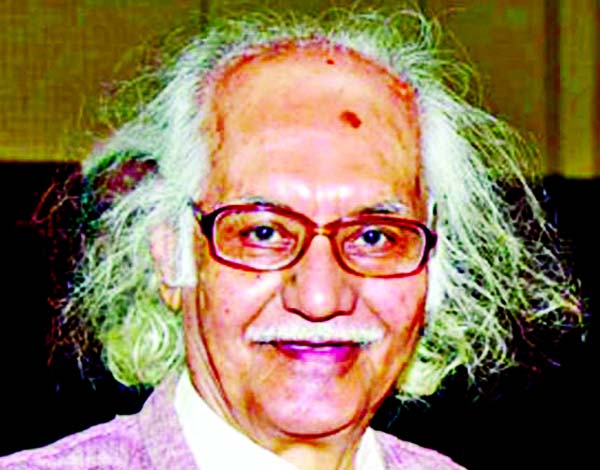 Kabir Chowdhury had his early education at home under his father\'s supervision. Later he completed his Matriculation from Dhaka Collegiate School in 1938 and IA from Dhaka Intermediate College in 1940 achieving first division and scholarship in both. He

Shawkat Hussain :
Kabir Chowdhury (1923-2011), National Professor, academician, writer, cultural and social activist, was born on 9 February 1923 in Brahmanbaria. His father was Khan Bahadur Abdul Halim Chowdhury and mother Umme Kabir Afia Chowdhury. Kabir Chowdhuryâs ancestral home was in Gopairbagh in Chatkhil thana of Noakhali. He was married to Meher Kabir, well known educationist and social worker.
Kabir Chowdhury had his early education at home under his fatherâs supervision. Later he completed his Matriculation from Dhaka Collegiate School in 1938 and IA from Dhaka Intermediate College in 1940 achieving first division and scholarship in both. He obtained his BA (Hons) and MA degree in English Literature from Dhaka University securing first class first position in both the examinations. In 1957-58, He studied American Literature at University of Minnesota in USA with a Fulbright scholarship, and obtained MA degree in Public Administration from the University of Southern California in 1965 on a government scholarship.Â  Â
After graduating From Dhaka University in 1944, Kabir Chowdhury began his professional career as a teacher in Pabna Edward College. Subsequently, he worked as a camp officer supervising refugees from then Burma. Between 1945 and 1955 he worked as Subdivisional Controller and then District Controller in different districts in East Bengal. In 1955, he returned to education joining Rajshahi Government College as a Professor of English after which he taught at Dhaka College, served as Principal in Barisal Brajamohon College and in Mymensingh Anandamohon College, followed by some other educational and administrative positions including Director of Bangla Academy, and later as its Director General. After the liberation of Bangladesh in 1971 Kabir Chowdhury joined the National Education Council as its first Member-Secretary, and later in 1973 he was made the Secretary of the Ministry of Education, Sports and Culture.
After a short stint in the bureaucracy, Kabir Chowhdhury voluntarily resigned from his position, and joined as a Professor of English in the University of Dhaka in 1974 where he continued to work until his retirement in 1983. During his years in the University he also lectured at the Department of Theatre as a part time faculty.
After his retirement, he continued to teach as a Supernumerary Professor and a part-time teacher in the Department of English. Professor Chowdhury was inducted as National Professor of Bangladesh in 1998.
Kabir Chowdhury's literary output is varied and phenomenal. He authored, edited, compiled, and translated well over 200 books. He wrote both in English and Bangla and also translated both ways. He translated into Bangla the masterpieces of Earnest Hemingway, Maupassant, Chekov, Strindberg, Ibsen, Samuel Beckett, Nagiub Mahfooz, J M Coetzee, Beowulf and Jose Saramago.
Kabir Chowdhuryâs translations were invaluable in making world literature accessible to Bangali readers and in introducing Bangla literature in English translations to readers abroad.
Kabir Chowdhury, committed throughout his life to a progressive socialist ideology and the idea of a secular and democratic polity, became more and more vocal and active in his role as an intellectual, heading a number of social, political and cultural organisations. He was President of the central advisory council of the Ekatturer Ghatak Dalal Nirmul Committee (Committee for the Elimination of the Collaborators of 1971), President of the South Asian Forum Against Fundamentalism and anti-Secularism, President of the Central Trust for the Memories of the Liberation War, President of the Bangladesh Foundation for Development Research, President of Theatre Drama Group, President of Bangladesh-German Friendship Society, President of the United Citizens' Movement, President of Dhaka Centre, International Film Criticism Committee, and President of the Bangladesh Film Society. His role in these organisations and his role as an academic afforded opportunities to visit numerous countries that included India, Pakistan, Thailand, Honkong, Japan, Turkey, Iran, USA, UK, USSR, Mongolia, North Korea, Uganda and Angola, where he attended and presided over conferences.
Even before he became National Professor in 1998, he had truly become a national figure, having been in the public domain for three decades. His stand against all forms of authoritarian and military regimes, his fearless fight against religious fundamentalism, most of all, his strong and uncompromising utterances against the collaborators of 1971 who were responsible for numerous war crimes, made him the rallying point, the most prominent figurehead for all secular, democratic, progressive movements in Bangladesh.
A noted academic and civil society activist, Professor Chowdhury has worked for over half a century in several national and international organisations for promotion of education, peace and inter-cultural understanding. He won laurels both from home and abroad.
Â He received the highest honours of Bangladesh, namely, the Independence Day Award and Ekushey Padak. He also received Bangla Academy Award, Bangabandhu National Award, Mohammad Nasiruddin Literary Award, Sher-e-Bangla Award, prestigious Tagore Peace Award from the Asiatic Society, Calcutta and William Carey Gold Medal from the William Carey Research and Study Centre of West Bengal.
Kabir Chowdhury died in Dhaka on 13 December 2011. As National Professor, his janaza at the Dhaka University Mosque was followed by a guard of honour, and he was laid to rest in the Intellectuals' Graveyard in Mirpur.Â