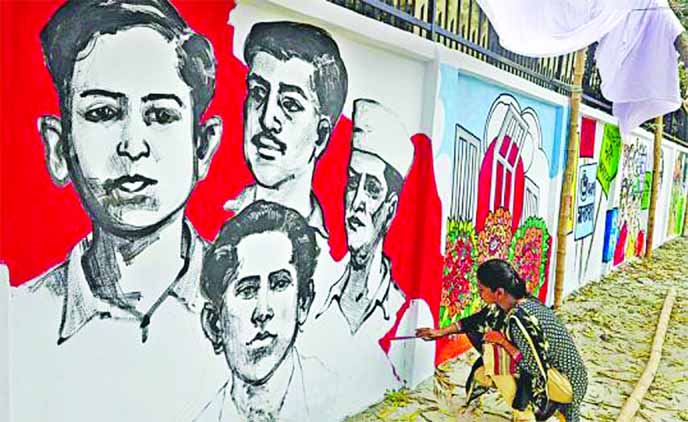 Dr Muhammad Abdul Mazid :
he Bengali Language MovementÂ  which gave birth the incidence of 21st February in 1952, popularlyÂ  known as the supreme sacrifice onÂ  EkusheyÂ  ( the 21st), was a socio politico culturalÂ  effort in the thenÂ  East Pakistan, now Bangladesh, advocating the recognition of the Bengali language as an official language of Pakistan. Such recognition would allow Bengali to be used in government affairs.
Both the wings (East Pakistan, also called East Bengal and West Pakistan) of the state of Pakistan, after its formation in 1947, were two regions of wide apart, were split along cultural, geographical, and linguistic lines. In 1948, the Government of Pakistan ordained Urdu as the sole national language, sparking extensive protests among the Bengali-speaking majority of East Pakistan. Facing rising sectarian tensions and mass discontent with the new law, the government outlawed public meetings and rallies. The students of the University of Dhaka and other political activists defied the law and organised a protest on 21 February 1952.
The movement reached its climax when police killed student demonstrators on that day. The deaths provoked widespread civil unrest .After years of conflict; the central government relented and granted official status to the Bengali language in 1956. In 2000, UNESCO declared 21 February International Mother Language Day for the whole world to celebrate, in tribute to the Language Movement and the ethno-linguistic rights of people around the world.
The Language Movement catalyzed the assertion of Bengali national identity in the then Pakistan, and became a forerunner to Bengali nationalist movements, including the emerging of self rule consciousness in 1954 general election, student movement in 1962,Â Â  6-point movement , uprising in 1969 and subsequently, finallyÂ  the Bangladesh Liberation War in 1971. The supreme sacrifice of the martyrs of the language movement on 21st February (1952) became an epitome for the inspiration of sustaining self consciousness and self dignity as a nation. It brought brilliant benefit of establishing an only nation state in the globe which is named after its language Bangla Desh. The 21st February has been such an epoch making incident which has been immortalized by global recognition as the International Mother Language Day. We as a nation feel proud today that Bangladesh, Bangla and the supreme sacrifice of our language movement are being pronounced, much-admired, gratefully remembered and honored worldwide.
Bengali-speaking people in East Pakistan made up 44 million of the newly formed Pakistanâs 69 million people in 1947. The Pakistani administration, its government, civil services, and military, however, were dominated by West Pakistanis. In October, 1947, a key resolution at a national education summit in Karachi advocated Urdu as the sole state language, and its exclusive use in the media and in schools. Opposition and protests immediately arose. Students from Dhaka brought out rally and the meeting stipulated Bengali as an official language of Pakistan and as a medium of education in East Pakistan. However, the Pakistan Public Service Commission removed Bengali from the list of approved subjects, as well as from currency notes and stamps. The central education minister of Pakistan made extensive preparations to make Urdu the only state language of Pakistan. Public outrage spread, and a large number of Bengali students met around the campus of the University of Dhaka on 8 December 1947 to formally demand that Bengali be made an official language. To promote their cause, Bengali students organised processions and rallies in Dhaka. It was not an instantly initiated or motivated movement. The demand, the protest had a long historical backup.
On the prestige and position of Bangla in day to day life, the mother tongue of the people of Bengal particularly of the Muslims traced back in the seventeenth century, as documented in the poems of Abdul Hakim (1620-1690) of Swandwip Noakhali. The seventeenth century bard was hesitant to classify if not condemn those who were inborn in Bengal but hate Bangla. From the mid-19th century, the Urdu language had been promoted as the lingua franca of Indian Muslims by political and religious leaders. Khanbahadur Ahsanullah (1873-1965), an educationist and social reformer, pronounced strongly in 1918, in one of his oration Bangabhasha O Musalman Shahitya, The Bengali language and the Literature of the Muslims that oneÂ  must respect Bangla and recognise its incomparability over other languages like Urdu etc. Ahsanullah made this observation in the event of some inventiveness of contemporary intelligentsias to establish Urdu as the lingua franca of Muslims in Bengal.
As early as the late 19th century, social activists such as the Muslim feminist Roquia Sakhawat Hussain (1880-1932) were choosing to write in Bengali to reach out to the people and develop it as a modern literary language. Exactly twenty five years earlier of February 1952 , two papers were presented on the second day of the Two-days First Annual Literary ConferenceÂ  (February 27-28, 1927) of the Muslim Shahittya Shamaj, the Muslim Literary Society, on the appropriateness in the use of Bangla in Muslim society in general and education in particular. Kazi Nazrul Islam (1899-1976) inaugurated the Conference.
Abul Hussain (1896-1938), the Secretary and one of the founders of the Shaittya Shamaj, which led the Shikha Movement, in his paper put forward that the mother language barrier has been the major obstacle on the way of social development of the Muslim community in Bengal.
The Language Movement laid not only the foundations for ethnic nationalism in many of the Bengalis of East Pakistan; it also heightened the cultural animosity between the authorities of the two wings of Pakistan. In fact, the Ekushey played an important role in making Bengalis aware of their cultural and national heritage and ultimately led to the creation of Bangladesh in 1971. Â
After 1971, even today, the Ekushey has been a guiding philosophy for any movement against oppression, injustice, disparity and denying of civic rights and in the comprehension of the socio-economic emancipation for the people of Bangladesh.