Country far behind to ensure participation of women entrepreneurs in business: Ferdaus Ara 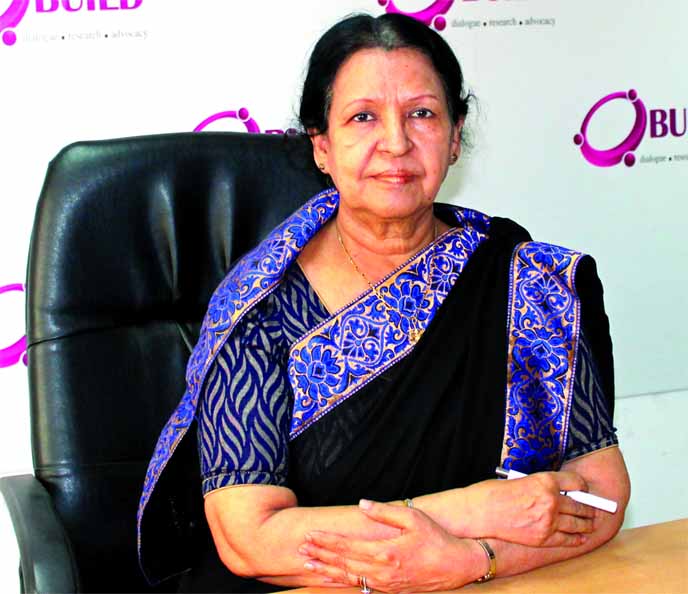 Ferdaus Ara Begum, Chief Executive Officer (CEO) of Business Initiative Leading Development (BUILD) talks to The New Nation about the problems for women empowerment in the country. The New Nation's Senior Reporter Al Amin took the interview. She also worked as Executive Director of the SAARC Chamber of Commerce & Industry and gathered experiences of working with SAARC countries.
Ferdaus Ara Begum said gender equality and empowerment of women is not only an explicit goal under the SDG 2030, but it is also an important driver for attaining sustainable development of an economy and a gendered approach to trade is undertaken as a vital factor for ensuring equal opportunity for women in trade related activities and their advancement.
One of the important steps of empowering women in trade activities is the expansion of those sectors where women entrepreneurs have comparative advantages and thus, a women entrepreneur can secure a competitive position in business, she said.
Referring economic census 2013, she said out of 7.8 million entrepreneurs women entrepreneurs are 0.56 million or 7.21 per cent in the country where as in the advanced and some developing countries, the number is much higher - 46.4 per cent in Ghana, 34.6 per cent in Russia, 33-8 per cent in Uganda, 33.0 per cent in New Zealand, 32.1 per cent Australia, 31.3 per cent Vietnam, 30.3 per cent Poland, 29.4 per cent Spain, 28.9 per cent Romania, 28.7 per cent Portugal.
From the above data, it is clear that Bangladesh is still lagging behind in ensuring the participation of women entrepreneurs in business, she said.
She said BUILD conducted a survey to measure time, cost and process requirements related to export and import for women-owned enterprises recently to find out the specific barriers faced by women-owned enterprises (WOEs) compared to men-owned enterprises (MOEs) in trade in the country.
With the objective of identifying the constraints faced by WOEs in trade and compare these with the experiences of their male counterparts, the BUILD CEO added.
From survey, BUILD found that one of the main constraints of women entrepreneurs is access to finance as banks are reluctant to extend support to SME women, she said.
Women entrepreneurs have to face lot of documentation hassles to get credit facilities from banks and NBFIs due to lack of collateral and guarantors, Ferdaus Ara Begum said.
She said the procedures of obtaining loans from banks and NBFIs are complex for women entrepreneurs and they fail to meet the conditions, which are required by financial institutions.
Not only that some of the business which they do from home such as e-commerce is not recognized to get trade license thus facing problems to get financing, she added.
Another major problem for women entrepreneurs in performing trade activities is that they have inadequate knowledge regarding the documentation process related to international trade and it them incompatible to deal with the various official services required for conducting export and import procedures, she said.
Awareness is needed for increasing their competitiveness in technological aspects in view of the increasing level of digitization taking place in service delivery mechanism for trading activities, she suggested.
Ferdaus Ara Begum said fair and equitable trade opportunities for women are considered as an integral part of inclusive economic development of a country.