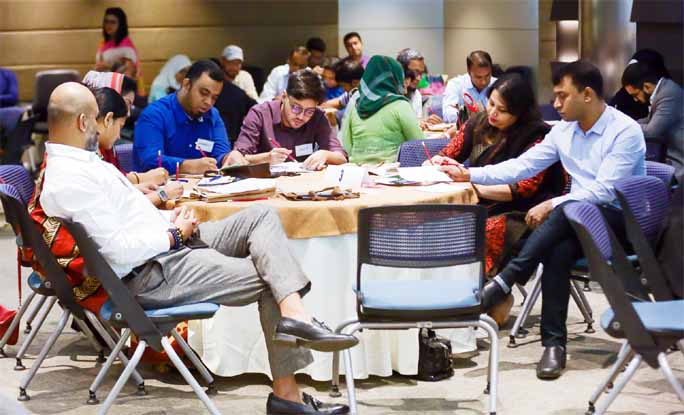 Campus Report :
KUMON is a well-known Japanese method of solving mathematical problems for the children. The same method is now recognized all over the world which offers radical method of teaching mathematics on self-learning and self-intellect. BRAC Kumon started their maiden voyage in Bangladesh in September 2017. Due to the effectiveness and huge response of the method, BRAC Kumon is offering Franchise and their very first Franchise Orientation Program 2020 at BRAC center auditorium took place recently. Head of BRAC Kumon Nehal Bin Hasan, Business Development Manager Sakeef Mahboob, Dhanmondi Center In-charge Humayera Mustofa and the other officials were present there.
Nehal Bin Hasan said, Kumon is a method of self-learning through one's own instructions and worksheets, whereby students who put in the most effort and initially receive a full score. He said through Kumon, students can make progress on their own without being specifically taught anything by the instructor. It ensures that students are provided with a learner-friendly environment and a learning method that is suitable to their skills. The first Kumon center was established in Osaka, Japan, in 1985. By the end of 2014, over 4 million students in more than 30,000 Kumon centres across many countries became a part of it. Kumon made its way into Bangladesh through the BRAC-KUMON initiative, which was launched at the BRAC Center on September 18, 2017. The BRAC- KUMON initiative conducts math programmes for children between the ages of 4 to 14. They plan to offer Kumon English programmes as well.