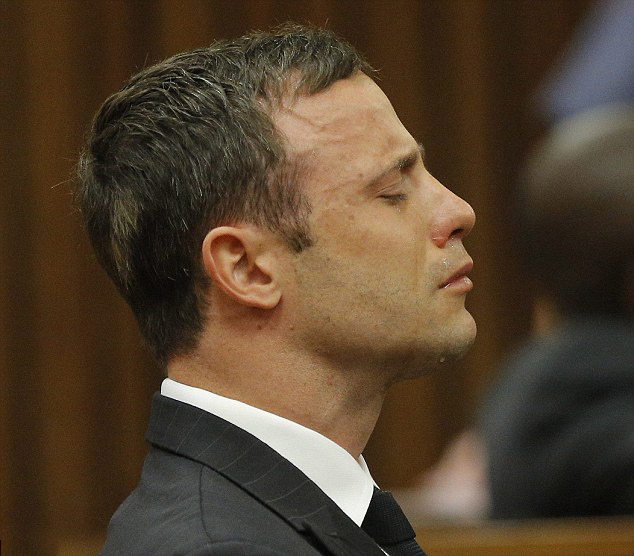 Oscar Pistorius weeps in the dock in Pretoria as Judge Thokozile Masipa reads notes as she delivers her verdict in Pistorius\'s murder trial.

The judge in the Oscar Pistorius trial has ruled out all murder charges, but says he may still be guilty of culpable homicide (manslaughter).
Judge Thokozile Masipa said the prosecution had failed to prove the Olympic athlete killed his girlfriend deliberately in the toilet after a row, prompting tears from Mr Pistorius.
He cannot have foreseen killing whoever was behind the toilet door, she said.
She added he was an evasive witness but this did not mean he was guilty.
The South African Olympic sprinter denies murdering Reeva Steenkamp on Valentine's Day last year, saying he thought there was an intruder. Mr Pistorius, 27, has pleaded not guilty to all the charges he faces, including two counts of shooting a firearm in public and the illegal possession of ammunition.
Judge Masipa began by detailing the charges against the athlete and repeating extracts of his testimony, reading in a slow, measured way. She then moved on to a summary of the trial.
A tense-looking Mr Pistorius looked on from the dock, and wept several times during the proceedings.
The judge questioned the reliability of several witnesses who apparently heard screams and gunshots at the time of the incident, saying most of those who said they had heard the incident had "got facts wrong".
The prosecution had used these witnesses to try to prove that Mr Pistorius had killed Ms Steenkamp with premeditation after an argument.
Later in her judgement, Judge Masipa concluded that the prosecution had failed in this.
"The state has not proved beyond reasonable doubt that the accused is guilty of premeditated murder," she said. "There are just not enough facts to support such a finding." The judge added that the accused believed his life was in danger and therefore could not be found guilty of a lesser charge of murder.
"How could the accused reasonably have foreseen that the shot he fired would kill the deceased?" she said.
"Clearly he did not subjectively foresee this as a possibility, that he would kill the person behind the door, let alone the deceased as he thought she was in the bedroom at the time."
But Judge Masipa then adjourned for lunch without ruling out culpable homicide, which suggests negligence without intention to kill and which could still mean a jail sentence.
The BBC's Andrew Harding says the court is witnessing Judge Masipa's logic and style - gentle, tolerant of error from witnesses, but razor sharp.
Correspondents say the judge appeared to be moving much more quickly than expected through the evidence, in a process which had been expected take more than a few hours or even days.
Most of the trial, which began on 3 March 2014, has been televised and attracted worldwide attention.
Before the fatal shooting, the 27-year-old athlete was feted in South Africa and known as the "blade runner".
He had won gold at the London 2012 Paralympic Games and also competed at the Olympics.
The judgement at his trial is likely to be well over 100 pages. The judge is going through each charge, summing up the prosecution and defence cases and analysing the evidence.
Ms Steenkamp, a 29-year-old model and law graduate, was hit three times by bullets shot through a toilet door by Mr Pistorius at his home in the capital, Pretoria, in the early hours of 14 February 2013.
He denies the prosecution's allegation that the couple - who had been dating for three months - had rowed.
The athlete said he thought she was still in the bedroom when he heard a noise in the bathroom, which he believed to be an intruder.
The prosecution have tried to characterise Mr Pistorius as a "hothead", while his defence team have portrayed him as having a heightened response to perceived danger because of his disability and background.
In July, a psychiatric report requested by the judge said Mr Pistorius had post-traumatic stress disorder but no mental illness that could prevent him being held criminally responsible for his actions.