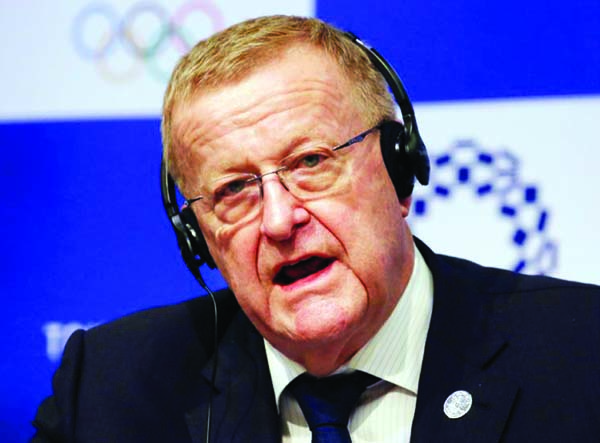 The International Olympic Committee (IOC)'s point man for the Tokyo Games has insisted there's no deadline to call off the event and that it was still going ahead as planned.
John Coates, chairman of the Tokyo coordination commission, was speaking before his return from Switzerland to Australia, where he is facing a mandatory two-week quarantine.
The Lausanne-based IOC is set for emergency talks Tuesday as doubts grow over whether it remains feasible to hold the Games during the coronavirus emergency, with world sport largely grinding to a halt.
Senior IOC member Dick Pound suggested last month that a final call would be made by late May.
But Coates, who is also president of the Australian Olympic committee, disputed the timeline.
"The IOC didn't recognise any dates that Dick came up with and I think Dick backed off that as well," he told Tuesday's Sydney Morning Herald. "It's all proceeding to start on the 24th of July.
"It's never been the IOC's position. It was Dick's idea," he added of the apparent deadline. "There is four months to go."
Japanese Prime Minister Shinzo Abe and International Olympic Committee chief Thomas Bach have repeatedly insisted preparations should continue as scheduled even as the virus scare intensifies.
The IOC's executive board is due to meet via conference call to prepare an "information exchange" ahead of a series of talks with athletes' representatives, National Olympic Committees and International Federations.
The issue of qualifying is expected to be a particular focus of the telephone meeting, after a long list of events were called off.
"The difficulty for those who have qualified or will qualify is they won't get any more international competition," admitted Coates, who said it will also be difficult to get athletes into Japan without further spreading coronavirus.
"Japan has got some restrictions on athletes but I know that the Chinese are probably the best organised," he said. "The Chinese are in various parts of Europe and the last I heard is they're bringing them all together in a university in Paris where they'll be fully contained, 600 of them.
"They will go straight from confinement there, straight into Japan. They won't put anyone on a plane who has got coronavirus."
Coates will go into a two weeks' isolation on his return home after Australia imposed strict travel rules to counter the spread of the virus.
He welcomed the tough measures being taken by Australia and other countries to tackle the growing crisis, but criticised Europe's response.
"Despite a bit of personal inconvenience, I'm very happy that countries are taking these steps that clearly some of the European countries should have taken earlier," he said.