Cummins in 'holding pattern' as IPL season in doubt 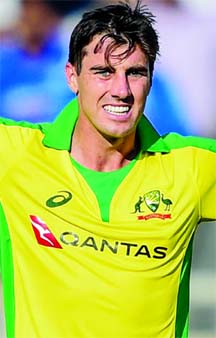 Australia's leading fast bowler Pat Cummins said COVID-19 lockdowns would make it "tight" for the big-money Indian Premier League (IPL) to go ahead this month as planned, leaving some of cricket's biggest stars in limbo.
"They obviously haven't cancelled it or anything like that yet. It's still a bit of a holding pattern," the Kolkata Knight Riders-contracted Cummins said, speaking from home isolation near Sydney.
"We're in contact with our teams every few days. Obviously, everyone's still really keen for it to all go ahead," he said, "but you know the priority is to minimise risk of (coronavirus) spreading."
Play is scheduled to start on April 15, the day after India's three-week lockdown is due to end and two months before restrictions on Australians travelling overseas could be lifted.
"I don't expect anything too soon to happen," Cummins said, hinting at a possible delay. "I mean obviously the preference would be to be over there playing butâ¦ I guess the silver lining is that we do get a bit of a break."
The start of the IPL season had already been pushed back from March 29 until April 15 "as a precautionary measure" over the coronavirus, the Indian cricket board said.
Even if the tournament does start after April 15, it could be without fans in the stadium and it is not clear that Australian players could attend with travel restrictions still in place.
The two-month tournament is a huge revenue earner.
The Twenty20 competition is estimated to generate more than $11 billion for the Indian economy and involves cricket's top international stars like England's Ben Stokes, Australia's David Warner and Indian captain Virat Kohli.