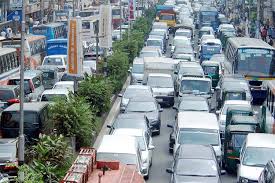 Eid travellers are being allowed to travel in âprivateâ vehicles though the government has ordered the shutdown of public transport services asking citizens to celebrate the Eid-ul-Fitr in their respective areas amid the coronavirus crisis.
They received a verbal directive from the âhigh-upâ on Thursday, a senior police official told bdnews24.com. Police have removed its checkpoint from Gabtali following the order, he said.
âThe government has agreed that people travel home to their villages to celebrate Eid. But the public transport service will remain closed. Police will ensure protection on the roads but everyone must travel in their own cars,â said Additional Inspector General of Police Mallik Fakhrul Islam.
Allowing people to travel even in their private vehicles will increase the risk of spreading the virus further, said a member of the national technical advisory committee on the coronavirus.
Most police personnel enforcing the lockdown on the ground said they are following the new directive as Eid-ul-Fitr moves closer.
âWe are letting people go to their village homes but not on public transports. Now you can guess how theyâll travel,â an additional deputy commissioner told bdnews24.com.
People can travel in private vehicles but not in public transports like buses, Bhaluka Police OC Mainuddin reiterated.
âOne canât travel in a rented car as only personally-owned cars will be allowed to ply the roads,â said Gazipur Police Superintendent Md Ali.
In an attempt to prevent the novel coronavirus infection from spreading, the government imposed a lockdown on Mar 26, closing all offices and educational institutions while shutting down the public transport system.
The lockdown has since been extended in phases, most recently until May 30. While the government rolled back some of the restrictions, allowing shops, malls, mosques and garment factories to reopen on a limited scale, it continues to enforce the suspension of public transport services.
Stringent measures have been put in place to regulate movement during the Eid-ul-Fitr holiday in a bid to prevent a further spread of the novel coronavirus.
The government has barred officials from leaving their work stations during the lockdown. Public transports on roads, water vessels, trains and domestic flights will remain grounded. Apart from vehicles used for the transportation of goods and emergency services, movement of all other transports on the highways will be strictly controlled, it said.
However, vehicles transporting goods are not allowed to carry passengers, according to government orders.
Police are also on high alert after check-posts at the entry and exit points to Dhaka were strengthened to restrict movement into and out of the capital without an emergency.
Law enforcers will take âsternâ action to prevent people from travelling to their native villages during Eid holidays this year, said IGP Benazir Ahmed.
âMany people are travelling to their ancestral homes during the Eid holidays. This cannot go on. People should follow the prime ministerâs directive to ensure their welfare.â
The decision to allow travel in private vehicles came just a couple of days before the Eid.
It was prompted by a fatal crash in Gaibandha where 13 people died after a truck overturned on the highway on Wednesday, a Highway Police official told bdnews24.com.
âMany people are travelling stealthily. This decision was taken to keep at least one travel option open to them.â
Asked about the move, Virologist Nazrul Islam, also a member of the national technical advisory committee on the coronavirus, said: âI'm only learning about the decision from you now. If it's true, the decision to allow people to travel in private vehicles will help accelerate the spread of the virus across the country.â