Where We Are with Vaccines and Treatments for Covid-19 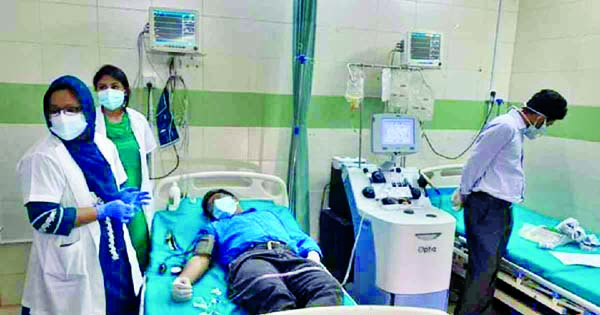 Health Desk :
Scientists around the world are working on potential treatments and vaccines for the new coronavirus disease known as COVID-19.
Several companies are working on antiviral drugs, some of which are already in use against other illnesses, to treat people who already have COVID-19.
Other companies are working on vaccines that could be used as a preventive measure against the disease.
With confirmed COVID-19 cases worldwide surpassing 4.3 million and continuing to grow, scientists are pushing forward with efforts to develop vaccines and treatments to slow the pandemic and lessen the disease's damage.
Some of the earliest treatments will likely be drugs that are already approved for other conditions, or have been tested on other viruses.
"People are looking into whether existing antivirals might work or whether new drugs could be developed to try to tackle the virus," said Dr. Bruce Y. Lee, a professor at the CUNY Graduate School of Public Health & Health Policy.
As of May 8, three medications had received emergency use authorization (EUA) from the Food and Drug Administration (FDA) - the anti-malaria drugs chloroquine and hydroxychloroquine, the anti-viral remdesivir, and a drug used to sedate people on a ventilator.
An EUA allows doctors to use these drugs to treat people with COVID-19 even before the medications have gone through the formal FDA approval process.
In mid-May, the small biotech company, Sorrento Therapeutics, announced it has an antibody drug that has been effective in early testing in blocking the virus that causes COVID-19. They say the drug could potentially be used to treat people with COVID-19 as well as help prevent infection.
These drugs are still being tested in clinical trials to see if they are effective against COVID-19. This step is needed to make sure the medications are safe for this particular use and what the proper dosage should be.
So it could be months before treatments are available that are known to work against COVID-19. It could be even longer for a vaccine.
But there are still other tools we can use to reduce the damage done by the novel coronavirus.
"Even though technological advances allow us to do certain things more quickly," Lee told Healthline, "we still have to rely on social distancing, contact tracing, self-isolation, and other measures."
Searching for effective treatments
Drug development is sometimes described as a pipeline, with compounds moving from early laboratory development to laboratory and animal testing to clinical trials in people.
It can take a decade or more for a new compound to go from initial discovery to the marketplace. Many compounds never even make it that far.
That's why many medications being eyed as potential treatments for COVID-19 are drugs that already exist.
In a recent review in the British Journal of Pharmacology, scientists from the United Kingdom called for wider screening of existing drugs to see if they might work against the coronavirus.
They identified three stages of infection at which the coronavirus could be targeted: keeping the virus from entering our cells, preventing it from replicating inside the cells, and minimizing the damage that the virus does to the organs.
Many of the drugs being developed or tested for COVID-19 are antivirals. These would target the virus in people who already have an infection.
Lee says antivirals work better if you administer them sooner, "before the virus has a chance to multiply significantly." And also before the virus has caused significant damage to the body, such as to the lungs or other tissues.
Dr. Robert Amler, dean of the School of Health Sciences and Practice at New York Medical College and a former chief medical officer at the Centers for Disease Control and Prevention (CDC) Agency for Toxic Substances and Disease Registry (ATSDR), says both antivirals and vaccines will be valuable tools in combating COVID-19.
However, he told Healthline that "antivirals are likely to be developed and approved before a vaccine, which typically takes longer."
Antivirals
Remdesivir: Developed a decade ago, this drug failed in clinical trials against Ebola in 2014. But it was found to be generally safe in people. Research with MERS showed that the drug blocked the virus from replicating.
The drug is being tested in many COVID-19 clinical trials around the world. This includes studies in which remdesivir is being administered alongside other drugs, such as the anti-inflammatory drug baricitinibTrusted Source.
In late April, the drug's manufacturer Gilead Sciences announced one of its trials had been "terminated" due to low enrollment. Gilead officials said the results of that trial had been "inconclusive" when it was ended.
A few days later, the company announced that preliminary data from another trial of remdesivir overseen by the National Institute of Allergy and Infectious Diseases (NIAID) had "met its primary endpoint."
Dr. Anthony FauciTrusted Source, the institute's director, told reporters the trial produced a "clear cut positive effect in diminishing time to recover." He said people taking the drug recovered from COVID-19 in 11 days compared to 15 days for people who didn't take remdesivir. More details will be released after the trial is peer reviewed and published.
Gary Schwitzer, founder of HealthNewsReview.org, though, said that the researchers changed the primary endpoint two weeks before Fauci's announcement. Schwitzer compared that to moving football goalposts closer to make it easier to get a touchdown.
At the same time, another studyTrusted Source published in The Lancet reported that participants in a clinical trial who took remdesivir showed no benefits compared to people who took a placebo.
Despite the conflicting results, the FDA issued an orderTrusted Source on May 1 for the emergency use of remdesivir.

Kaletra: This is a combination of two drugs - lopinavir and ritonavir - that work against HIV. Clinical trials are being done to see whether it also works against SARS-CoV-2.
One small study published May 4 in the journal Med by Cell Press found that lopinavir/ritonavir did not improve outcomes in people with mild or moderate COVID-19 compared to those receiving standard care.
Another study, published May 7 in the New England Journal of Medicine, found that the drug combination was not effective for people with severe COVID-19.
But another study found that people who were given lopinavir/ritonavir along with two other drugs - ribavirin and interferon beta-1b - took less time to clear the virus from their body. This study was publishedTrusted Source May 8 in The Lancet.

Favipiravir: This drug is approved in some countries outside the United States to treat influenza. Some reports from China suggest it may work as a treatment for COVID-19. These results, though, haven't been published yet.
Japan, where the medication is made, is sending the drug to 43 countries for clinical trial testing in people with mild or moderate COVID-19.
Arbidol: This antiviral was tested along with the drug lopinavir/ritonavir as a treatment for COVID-19. Researchers reported in mid-April that the two drugs didn't improve the clinical outcomes for people hospitalized with mild to moderate cases of COVID-19.