'No to treatment continues' 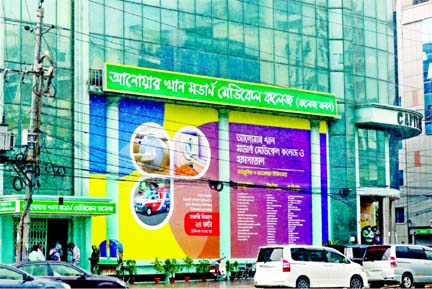 A view of Anwar Khan Modern Medical College and Hospital in Dhaka.

Private hospitals around the country are turning away Covid-19 patients causing a serious impact on the country's response to the coronavirus pandemic.
Not just coronavirus, for the past two months most of the private hospitals have been showing hesitant to treat other patients, even though the Ministry of Health laid down guidelines asking all hospitals to create separate wards for the isolation and treatment of Covid-19 patients.
Sources said only a few private hospitals have opted to offer such treatment, but most others are yet to arrange the required facilities. In such a situation, symptomatic and critical cases were referred to crowded public hospitals although many beds of private hospitals remain unoccupied.
A 63-year-old woman died early on Monday night from breathing complications after she was refused treatment at six different hospitals in Sylhet.
The woman, from Kazirbazar area in Sylhet city, was suffering from Asthma for decades and fell critically ill on Monday night.
Her family members rushed her to a private hospital, but she was refused treatment. Five other hospitals followed suit. Two hours later, she died in ambulance just before they reached Sylhet MAG Osmani Medical College Hospital (SOMCH).
Salehuddin, 58, a resident of the capital's Darus Salam, died in an ambulance early Friday after he was refused CCU facilities in 10 hospitals.
Initially, Salehuddin was taken to Ibn Sina Medical College Hospital on the evening of May 27.
Victim's elder son, Shahazada Sultan, said from Ibn Sina that they took him to some 10 hospitals, including Anwar Khan Modern Medical College Hospital, LabAid, Renal Hospital, Ayesha Memorial Hospital and BIRDEM.
Three of the 10 hospitals had earlier been permitted to conduct Covid-19 tests on their own.
But, none of these hospitals agreed to admit him and he breathed his last in an ambulance while entering Dhaka Medical College Hospital (DMCH) new building after 3am on May 29, Sultan said.
He said, "My father struggled for almost five hours but he had no access to urgent medical assistance."
These are only few incidents of many. Patients are dying after hospitals used to refuse admissions.
At the moment, the government hospitals are overrun with huge Covid-19 patients. In the wake of the soaring rate of virus infection, the government announced Covid-19 treatment free of cost at 13 private hospitals, including Anwar Khan Modern Hospital.
The hospital started its service with the 'Covid-19 dedicated' tag from mid-May with a capacity of treating 200 patients. But the hospital, owned by a ruling party's MP, stopped the service.
The hospital Director Dr Ehteshamul said that their contract with the government ended on May 31.
But sources said that the hospital scratched the contract unilaterally after several corporate houses acquired it with big sum of money to treat their officials and executives.
Â "No hospital can turn away any patient without examination and required intervention under any circumstances," said Prof Dr. Iqbal Arslan, President of Swadhinata Chikitsak Parishad.
He said patient who is entering the hospital premises must be checked and shifted or admited him, depending on the patient's health condition.
"Patients run from pillar to post seeking treatment, but due to the lack of a proper guideline and coordination among the concerned bodies, they are being refused treatment," Iqbal Arslan told The New Nation adding that directorate of health services should enforce the standard operating procedure (SOP) for screening, transferring, admitting and discharging of patients during this pandemic period."
He also observed that Bangladesh is now relying heavily on the private sector's healthcare facilities and so the citizens are paying for it.
There is no control over private hospitals and clinics
"The current situation indicates that the government has lost control over the private health care sector," said Dr. Yasmin Hemayet Uddin, adding, "The government has not been able to exercise its authority over the private sector and even bring the private sector into the accountability framework due its over-dependence on private healthcare system."
According to the government's health department, there are 654 government hospitals in Bangladesh with a total 51,316 beds. Besides, there are 5,055 private hospitals with a total capacity of 90,587 beds.
Dr Yasmin Hemayet Uddin, former Country Director of Mary Stopes Bangladesh, said, "If the services in the government hospitals improve along with the increased number of the government hospitals, patients should not go for treatment to private hospitals and clinics."
There are also lots of complaints from the general public about health services and management in public hospitals. As the quality of services in public hospitals deteriorates day by day, the dominance of the private sector in the health system of Bangladesh has increased.
Dr Mushtaq Chowdhury of the BRAC University School of Public HealthÂ  said,Â  "Point four per cent of Bangladesh's GDP has been allocated for the government's health programme which is the lowest in the world.Â  In Sri Lanka, they allocate four times as much. It is known to all that our public health sector has been neglected for the last three or four decades and that is why private health care system flourished.
Â According to the Ministry of Health, the Bangladesh government spends only 0.69 percent of GDP on health.
Talking to this correspondent, officials of private hospitals said, with coronavirus infections spreading in hospitals through unknown carriers, private hospitals have even gone to the extent of denying admission to all patients, except in a life or death situation.
When contacted, Director (hospital) at the Directorate General of Health Services (DGHS) Dr Aminul Hasan told The New Nation that licences of private hospitals would be revoked after gathering evidence if specific complaints are filed against them over turning back the patients.