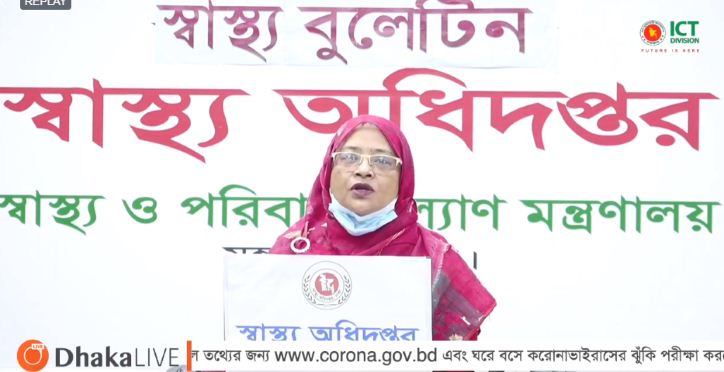 More 30 corona infected patients have died in the last 24 hours, the Directorate General of Health Services (DGHS) said on Friday.
âThe death toll now stands at 811,â Professor Dr Nasima Sultana, Additional Director General (Administration) of DGHS, said in a regular press briefing in Dhaka.
Dr. Sultana said that more 2828 people have detected as Covid-19 positive in the same period. With this, the total number of infected now stand at 60,391.
She said total 14,088 samples were tested in 50 authorised laboratories across the country in the last 24 hours.
Besides, 643 coronavirus infected patients have recovered since Thursday from different hospitals across the country.
The DGHS official said that total number of the recoveries is now stand at 12,804.
She said also that total 365 people were sent under isolation in the last 24 hours.
According to the press briefing, among the deceased, 23 were male and seven female.
She further stated that among them 11 from Dhaka, 12 from Chattogram, three from Sylhet, two from Rajshahi, one from Barishal and another was from Rangpur division.
Of them, the officials said, three were between 31-40 years old, seven between 41-50, 11 within 51-60, six between 61-70, two were from 71-80 and another was from 81-90 years old.