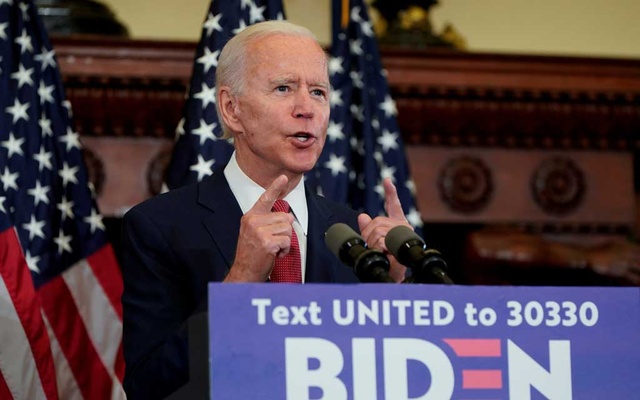 The New York Times: Former Vice President Joe Biden told a group of black supporters on Thursday night that most Americans were good people who think the nation can be improved, while also declaring that âthere are probably anywhere from 10 to 15% of the people out there that are just not very good people.â
Biden offered his estimate during remarks in which he spoke about the importance of a president setting a positive example for the nation on racial issues. He accused President Donald Trump of dividing the country while pledging that, as president, he would not.
âThe words a president says matter, so when a president stands up and divides people all the time, youâre going to get the worst of us to come out,â Biden said during the discussion, which was moderated by actor Don Cheadle.
âDo we really think this is as good as we can be as a nation? I donât think the vast majority of people think that,â the former vice president said. âThere are probably anywhere from 10 to 15% of the people out there that are just not very good people, but thatâs not who we are. The vast majority of the people are decent, and we have to appeal to that and we have to unite people â bring them together. Bring them together.â
Bidenâs comments harked back to controversial statements by past presidential nominees who generalised in negative terms about portions of the population. In 2012, Mitt Romney, whose taped comments at a private fundraising event were later leaked, said â47%â of voters would never support him because they were âdependent on the government.â And in 2016, Hillary Clinton said half of Trumpâs supporters belonged in a âbasket of deplorables.â
Trump, for his part, has made harsh, denigrating and insulting remarks about many individuals as well as whole groups of people and countries, including African Americans, Mexican immigrants, Muslims, women, Jewish donors, and Haiti and some nations in Africa.
At different points in his 70-minute conversation, Biden spoke about race and racism in America in stark terms. He repeated several times that he didnât know what itâs like to be discriminated against on the basis of race, though he said his experience of being bullied for his childhood stutter helped him understand bullies and âwhat itâs like to be humiliated.â
âIâm a white man,â he said. âI think I understand, but I canât feel it. I feel it but I donât know what itâs like to be a black man walking down the street and be accosted, or to be arrested or, God forbid, something worse.â
Biden suggested that his election wouldnât eradicate the systemic racism that has sparked protests across the nation in the wake of the death of George Floyd after he was pinned down by Minneapolis police officers.
âHate didnât begin with Donald Trump, itâs not going to end with him,â Biden said. âThe history of our country is not a fairy tale, it doesnât guarantee a happy ending, but as I said earlier, weâre in a battle for the soul of this nation. Itâs been a constant push and pull for the last 200 years.â
Biden also acknowledged his own misjudgments about the progress the nation has made on race.
âI thought we had made enormous progress when we elected an African American president, I thought things had really changed,â he said. âI thought you could defeat hate, you could kill hate. But the point is, you canât. Hate only hides, and if you breathe any oxygen into that hate, it comes alive again.â
Speaking to an activist who was planning a Friday night march in Bidenâs hometown, Wilmington, Delaware, the former vice president offered a gentle warning against allowing the protest to lead to destruction.
âWe canât allow the protesting to overshadow the purpose of the protest,â Biden said. âSo thereâs going to be a lot of folks that are going to want to cause trouble. Some cops, but some folks too. Itâs going to take young leaders like you to change things in the city.â