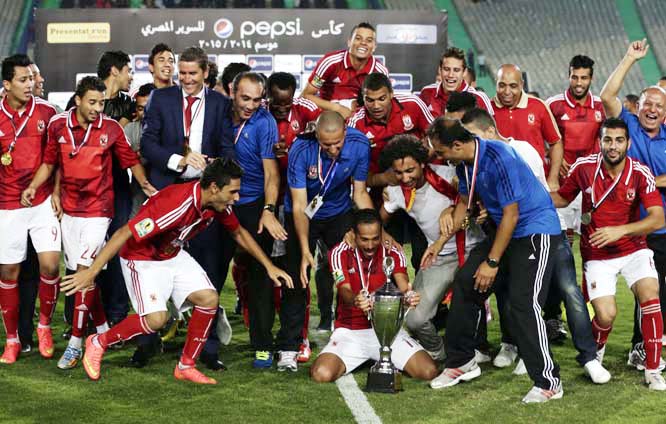 Al Ahly players celebrate winning the Egyptian Super Cup soccer match against Zamalek at the Cairo International Stadium in Cairo, Egypt on Sunday. The Egyptian football association (EFA) said that fans of Al Ahly and Zamalek clubs will not be allowed to

Al-Ahly maintained their dominance over bitterest rivals Zamalek, beating them 5-4 on penalties on Sunday in Cairo to win the 2014 Egyptian Super Cup.
After a barren draw in regulation time, the Red Devils bounced back after missing their opening two kicks from the spot to wrap up the tie 5-4, and further extend their unbeaten streak against their archrivals since 2007.
The White Knights were on the verge on victory but Burkina Faso midfielder Mohamed Koffi blasted wide the decisive kick before the Ahly bounced back to win it.
Ahly duo, Ahmed Abdel Zaher and Walid Soliman were denied by Zamalek goalie Ahmed El-Shennawy, which put Zamalek on the brink after Mohamed Abdel Shafy, Khaled Kamar and Omar Gaber had converted their kicks. On the otherhand, Mohamed Naguib, Bassem Ali and Saad Samir scored for the Red Devils.
However, Koffi blasted wide to the dismay of all allowing Ahly to come back after a 3-3 tie. After Sabri Raheel and Mohamed Rizk hit target for Ahly, Ibrahim Salah's shot at the post ensuring the Red Devils a record eighth Egyptian Super Cup, six more than Zamalek, whose last title was in 2002.
It was the second time Ahly had beaten Zamalek in the annual one-off match on penalties after the 2003 edition. Ahly had earlier won the Egyptian League for a record extending 37th time.