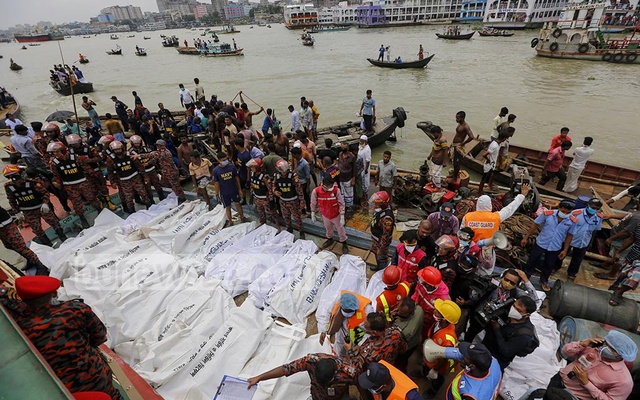 At least 23 people including six women and three children died as a launch, carrying over 150 passengers, capsized in the Buriganga River near Shyambazar on Monday morning.
Â
Shajahan Shikder, deputy assistant director(media) of the Fire Service and Civil Defence Headquarters , said so far 23 bodies were retrieved from the sunken launch .
Â
The bodies were sent to Mitford Hospital, he said.
Â
According to the duty officer at the control room of Fire Service, the Dhaka-bound launch from Munshiganj sank in the river around 9:33 am after being hit by another launch `Mayur-2` while the launch was anchoring in Farashganj ghat.
Â
On information, fire service divers rushed to spot and started the rescue operation, said the official.
Â
UNB Keraniganj correspondent reported from the spot that the `MV Morning Bird` launch carrying over 150 passengers sank in the river.
Â
According to witnesses, around 50 passengers managed to swim ashore with the help of locals.
Â
AKM Arif Uddin, joint director at BIWTA (Bangladesh Inland Water Transport Authority), said a salvage ship, `Hamja`, left Narayanganj for Dhaka to rescue the sunken launch.
Â
He said most of the passengers had been able to swim ashore. Fire service divers are working to rescue the missing passengers, he added.Â  --- UNB, Dhaka