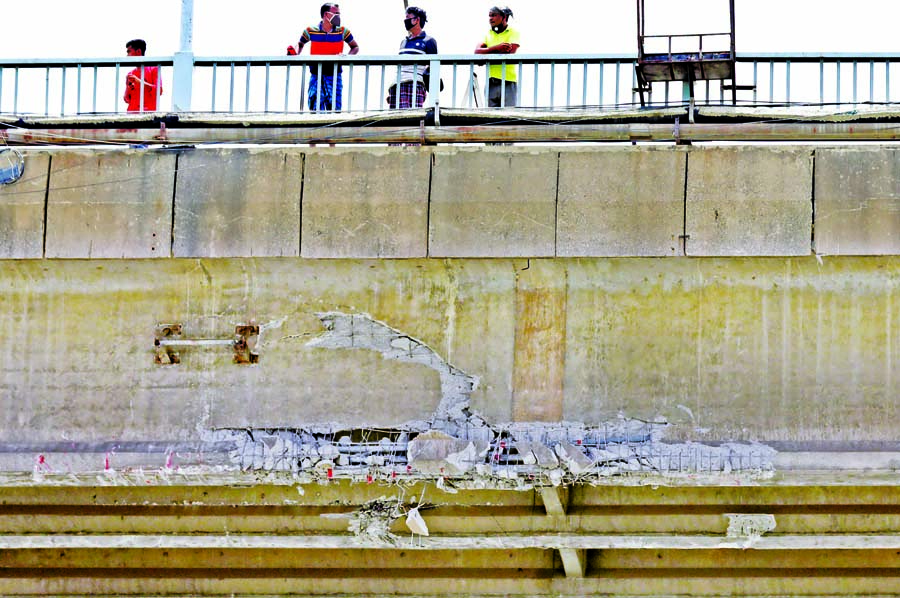 Cracks develop on the Buriganga Bridge as a rescue ship hits one of the girders of the bridge while trying to pass its underneath on Monday. This snap was taken on Tuesday. NN photo

Staff ReporterÂ  :
The Buriganga Bridge (Bangladesh-China Friendship Bridge-1), popularly known as Postogola Bridge on the Buriganga River, was severely damaged when a rescue ship tried to pass underneath the bridge on its way to salvage a sunken launch 'Morning Bird' near the Farashganj ghat.Â  Â
A report prepared by a technical team says that a girder of the bridge is completely damaged and another is severely damaged.Â  The technical team visited the bridge on Tuesday morning and submitted an instant report to the Roads and Highways Department.
The Department's Dhaka Zone Additional Chief Engineer Md Sabuj Uddin Khan said, they have already received the report and had a meeting in this regard.
"It was decided in the meeting that traffic will remain suspended in two lanes of the four- lane bridge as girders, which have been badly damaged, are the main components of a bridge's stability," said Sabuj Uddin Khan. "However, traffic by another two-lanes resumed in the evening after initiatives taken to manage traffic have materialized." He said, "It will take time to repair the two girders as it is the rainy season now and the river is flowing to the brim."
Previously on Monday evening, vehicular movement on the Bangladesh-China Friendship Bridge-1 at Postogola in Dhaka was suspended for an indefinite period.
A Bangladesh Inland Water Transport Authority (BIWTA) rescue ship named Prottoy was going to Farashganj from Narayanganj to rescue the 'Morning Bird' which capsized in the river killing at least 33 people.
Earlier, BIWTA Chairman Commodore Golam Sadeq said the rescue ship could not pass underneath the Buriganga Bridge-1 as it was too tall.
"The ship hit the girder when it tried to pass under the bridge, but the damage was not severe as far as I know," he added.
Sabuj Uddin Khan said the rescue ship hit one of the girders of Postogola Bridge between 2:00pm to 2:30pm on Monday.
"I think the incident occurred due to the negligence of the captain and the drivers of the ship."
Besides, the vehicles on the route to Buriganga Bridge have already been asked to use the Second Buriganga Bridge at Babubazar as an alternative.
Postogola Bridge has regular busy traffic as it connects Dhaka city to many districts of Barishal and Khulna Divisions. Until the Bridge is completely repaired, people will suffer from traffic grid-lock.