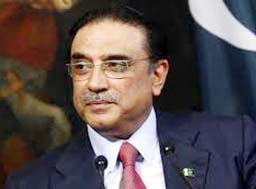 An Islamabad accountability court on Tuesday issued bailable arrest warrants for former president and PPP co-chair Asif Ali Zardari in a case that accused him and former premiers Nawaz Sharif and Yousuf Raza Gilani of receiving luxury vehicles and gifts from the Toshakhana.
The court also directed authorities to initiate the procedure to declare Sharif - whose arrest warrants were issued in an earlier hearing - as a proclaimed offender in the case, saying that the former prime minister was not taking part in court proceedings "on purpose".
During the proceedings, Zardari's lawyer Farooq Naek told the court his client had not appeared for the hearing because the former president is "of advanced age" and personally appearing could exposed him to the novel coronavirus. The judge remarked that Zardari would have to appear as it was a criminal case and denied his request for exemption. Zardari's counsel further argued that issuing arrest warrants would have been appropriate if the former president had no representation in court. Naek said he had appeared on behalf of the PPP co-chairperson, assuring the court that Zardari would appear in a later hearing.
Naek also added that if Zardari appears in person, his supporters will gather at the court which will result in a crowd, putting others at the risk of contracting coronavirus.
The legal representative of the National Accountability Bureau (NAB), Sardar Muzaffar, said it was the administration's job to control a crowd. He pleaded that the court "should not extend any leniency and issue non-bailable arrest warrants".