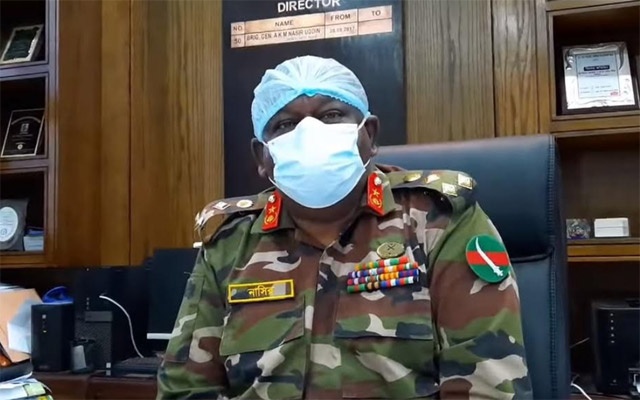 The director of Dhaka Medical College Hospital has rejected the reports of Tk 200 million in monthly food bills for the doctors, nurses and other health workers engaged in the treatment of coronavirus patients.
âThere is no doubt that it is false propaganda. The money is spent to pay the hotel bills. We are spending Tk 500 for food per person. We have mentioned it while getting approval from the ministry,â Brig Gen AKM Nasir Uddin said.
Prime Minister Sheikh Hasina ordered an investigation into the issue of exorbitant food bills for the DMCH staff.
Facing severe criticism over the issue, the DMCH director offered an explanation to journalists on Wednesday.
At least 150 doctors, 250 nurses and more than 100 other medical workers contracted the coronavirus as of now. They are quarantined in hotels in line with the health protocols, he said.
The DMCH asked the hotels to limit food bills to Tk 500 per day per person, the director said.
âHotel rents range from Tk 500 to Tk 5,000, which accounts for most of the expenditure. Besides the rent and food bills, we need to pay for their commute. We have 15 minibuses, two microbuses and two buses for them to commute three times a day,â he said.
They estimated a budget of Tk 200 million for two months after the government asked for an estimate, said Nasir Uddin.
âWe are running the railway hospital and placed a budget of Tk 10 million for that.â
âYou always seek a little extra while planning a budget. Even then weâll look into the matter of exorbitant food bills. Weâll pay the hotels accordingly and deposit the unused funds to the national treasury. Itâs a normal process.â
âOne person delivers a statement and the entire country keeps on commenting on it. I was astonished to see it. Is it okay for the entire country to run after false propaganda?â
DMCH will provide all proof, Nasir Uddin said.
âWeâre government officials. Itâs obvious that the authorities will take necessary action if we donât work properly. But the person who insulted a great organisation like ours should be exposed as well.â