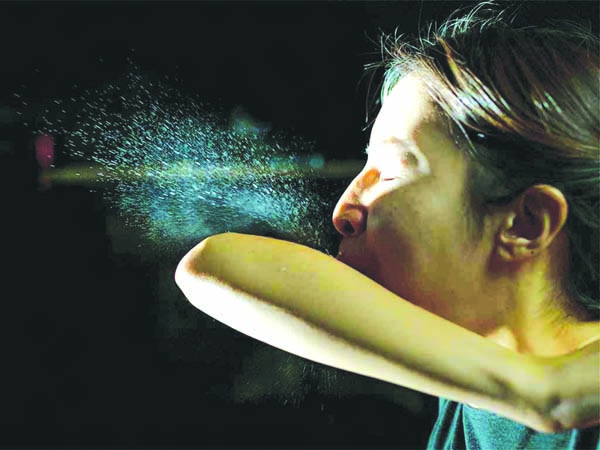 Justin Pringle :
COVID-19 has sharply brought into focus the impact of respiratory infectious diseases on humanity. It has also shown that the greatest defence against health crises is government policy that is strongly rooted in science.
In an attempt to contain the spread of the disease many governments have implemented policies that prevent physical interaction. This has a direct impact on our daily lives: the way people move, where they work and how they interact with each other.
These policies are a good first step, but they are limited because they don't fully account for how the virus physically spreads from person to person - that is, the physical routes of transmission. Some of the answers may lie in a field of study called fluid mechanics - understanding how fluids move.
Understanding how fluids move can help us get to grips with how a virus like the one causing COVID-19 travels from an infected person to others. This is because when we cough or sneeze we expel micro-droplets whose motion is governed by the principles of fluid mechanics. Understanding the way the virus is transmitted can inform public health interventions to minimise the risk.
Recent insights at the interface between fluid mechanics and epidemiology are already beginning to unlock at least some understanding of COVID-19's physical routes of transmission. For example, recent work has shown that a cough or sneeze consists of a multiphase chaotic gas cloud. This gas cloud transports viral pathogens much further than predicted.
The mounting evidence has led the World Health Organisation (WHO) to acknowledge that the coronavirus can be spread by tiny particles suspended in the air.
The study of fluid mechanics
Fluid mechanics is the study of how fluids move. That may sound simple, but it's actually very complex.
First, it's important to understand what it means to move. The physicist Sir Isaac Newton showed that something called a force is required to change how an object moves. This force must be applied to the object and the magnitude and direction of this force is the product of the object's mass and acceleration.
Acceleration refers to how something's velocity changes with time (rate of change of velocity). Additionally, an object's velocity refers to the distance it travels in a certain amount of time. Therefore, Newton's laws of motion can help us predict how an object moves through space and time. This helps us calculate the object's position at any given time.
We can apply Newton's laws of motion to fluids in an attempt to explain how fluids move. A fluid is a substance whose particles move a lot relative to each other when a force is applied to it.
In other words the defining property of a fluid is the ease with which the fluid can be deformed. Fluids have no defined shape. Any liquid such as water is a good example, but the air around us can also be treated as a fluid. The line between fluids and solids is not distinct and in some instances solid objects such as jelly, dry paint and asphalt can behave like fluids and vice versa.
An important characteristic of fluids is that they transport "things"; these "things" could be heat, pollutants, pathogens or other fluids. Therefore the study of fluid mechanics is fundamental to understanding the world we live in. For example fluid mechanics can help us model and predict how heat from the sun gets transported around the world (think climate change). Another example is the applications of fluid mechanics to the transport of respiratory diseases such as COVID-19.
Applying fluid mechanics to COVID-19
Recent studies have shown that our current understanding of the routes of transmission of respiratory diseases is limited and based on an oversimplified model. Recent developments in fluid mechanics and epidemiology have shown that turbulent puffs, emitted by sneezing or coughing, transport pathogens much further than expected.
The characteristics of the "puff" or "plume" that is emitted when we breathe, cough or sneeze are important for understanding how the fluid droplets are transported.
Fluid droplets inside the "puff" get distorted by the complex air flow patterns associated with the "puff" or "plume" and its interaction with the ambient air. This process can break up a fluid droplet into several pieces that fall out of suspension, contaminating many surfaces. Of course the break-up process can also result in smaller particles that can travel further than the larger ones.
It's also been shown that the flow field, temperature and humidity affect how far these droplets travel. This has implications for the WHO's 1-2m (3-6 ft) physical distancing guidelines. Research has shown that these droplets can travel as far as 7m (20ft). This doesn't take into account the micro-droplets that can be transported even further because of building ventilation systems.
In an open letter to the WHO more than 200 scientists recently accused the organisation of underestimating the possibility of airborne transmission of COVID-19. Given the WHO's recent statement, these guidelines are likely to be revised.
The principles of fluid mechanics are already used in ventilation design and occupational health; it's possible that our new understandings about fluid mechanics and epidemiology could be used to help improve building ventilation systems. What we're learning may also inform government policy to reduce the spread of future pandemics like COVID-19.