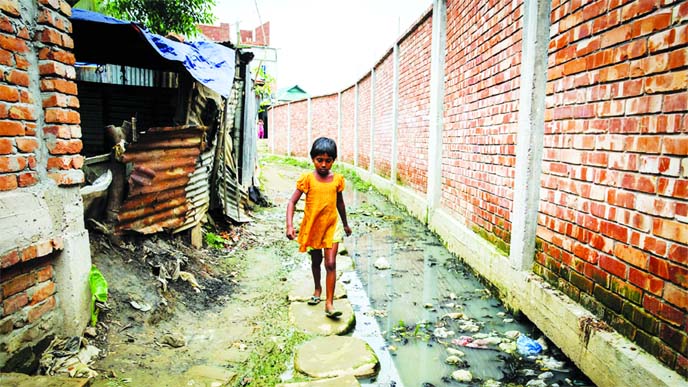 Peash Sheikh :
Faecal sludge(FS) is that the slurry that contains both solid and liquid waste that accumulates in on-site sanitation systems (OSS), e.g., septic tanks. Faecal Sludge Management (FSM) includes the storage, collection, transport, treatment, and safe end-use or disposal of FS that means all five components of the sanitation value chain.
On-site sanitation is that the dominant type of hygiene in Africa and South Asia countries as well as Bangladesh that doesn't involve conventional sewerage technology, primarily attributable to its high initial costs. About 2.1 - 2.6 billion people in low- and middle-income countries rely on on-site technologies that produce tons of untreated faecal sludge (FS) every day that has to desludging frequently.
The overall objective of faecal sludge management is to ensure that the faecal material removed from on-site and decentralized sanitation facilities is dealt with in a way that protects each public health and, therefore, the environment and does not produce an area nuisance. Every day, the world around, several hundred thousand tons of faecal matter from either open defecation or collected from on-site sanitation (OSS) installations are disposing of into the urban and peri-urban environment. If the faecal sludge management issue does not take consideration, severe environmental degradation and associated health risk will increase.
At present, there is not abundant environmentally safe fecal sludge collection and disposal system in Bangladesh. After emptying containment, emptiers dump massive amounts of fecal sludge indiscriminately into the environment. As there exists less number of treatment plant nearby, emptiers use faecal sludge on agriculture land. If this sludge is not being adequately managed, negative impacts on the urban environment and public health may result:
lÂ  The water and faecal born disease burden increases due to unhealthy and unhygienic conditions from poor sanitation.
l Haphazardly and lawlessly disposal of FS into the urban and peri-urban setting, street facet, water bodies causes a permanent unfold of gastrointestinal infections and resulting in serious environmental and pollution.
lÂ  Unlined pit latrines may collapse during emptying and pollute surface land and also groundwater sources.
l Use of Kerosene and ash to control odor problems after the evacuation process becomes more harmful to the environment instead of removing the odor.
lÂ  The use of manual emptying tools is not only harmful to the workers but also create an aesthetic mess, contamination, and environmental pollution.
l The "wastes" are either utilized in agriculture or cultivation or discharged indiscriminately into lanes, drain ditches, onto open urban areas and into inland waters, estuaries, and therefore the ocean, inflicting severe health impacts, pollution, and eye and nose sores.
Emptying services like manual, semi-manual, and mechanical services exercised in Bangladesh. Though the manual emptying of pit/septic tanks is widely practiced, there arefew exceptions, such as in Dhaka, Chittagong, Khulna City Corporation (KCC), Faridpur, and Kushtia Municipality mechanical emptying of sludge practiced. People used to adopt manual emptying more because it has low equipment cost, O&M cost, service accessibility is rapid. But it has some disadvantages, which can be an obstacle to the development of a safe environment and good health. They are:
lÂ  Significant health risks to workers as they usually don't wear safety gear(PPE)
l Associated with indiscriminate dumping
lÂ Â  Â The liquid is usually pumped out to nearby drains, canals or water bodies
lÂ Â  Â Lack of appropriate equipment means spillage regularly occurs and spreads odors
lÂ  Rarely acceptable to municipalities and so not regulated
lÂ  Since the cost of FS removal is high, people, therefore, clean the septic tanks late.
lÂ  A time-consuming process discourages people from cleaning storage regularly.
lÂ  Less available disposal points (< 0.5 km)
So, mechanical emptying through the vacuum and vacuum tankers can be used instead of manual emptying. It isfast and generally efficient, minimal health risk, easiest and most hygienic method.
In Bangladesh faecal sludge management is generally provided by individuals or informal private sector operators in an unplanned, unsystematic, unhygienic and poorly regulated way. FSM Stakeholders in Bangladesh are LGD, LGED, DPHE, WASA, CBO/NGO, LGIs, GoB etc. They are responsible for keeping the environment safe by implementing a proper FSM strategy.
Different options for treatment can be adopted for treating sludge. The objective of treatment is to convert unpleasant and potentially harmful faecal sludge and septage into offensive products that harm neither public health nor the environment and are easy to handle. They are a. Co-composting b. Unplanted drying beds c. Planted drying beds d. Waste stabilization ponds e. Anaerobic digestion with biogas utilization f. Solids-liquid separation.
Disposal facilities are needed to ensure so that the emptiers do not litter FS from the sanitation facilities. A safe environment can be achieved by eliminating existing problems in faecal sludge management and strengthening stakeholder supervision.
(Peash Sheikh is a student at Dept. of Civil Engineering at Chittagong University of Engineering & Technology. Email: [email protected])