Antibodies to SARS-CoV-2 disappear within 3 months 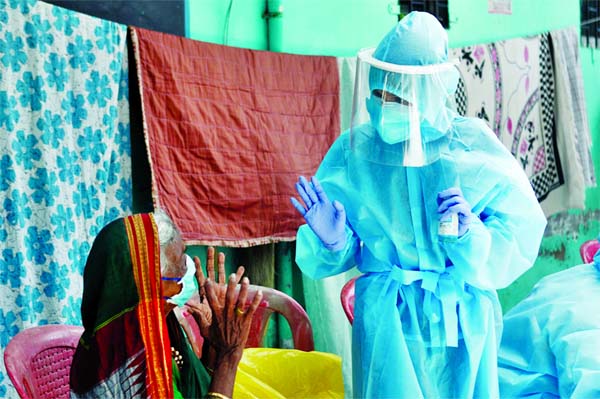 Dr. Liji Thomas, MD :
The current COVID-19 pandemic, which 'officially' began in Wuhan, China, in late December 2019, has spread rapidly across the world, causing hundreds of thousands of deaths among over 13 million cases. While around a fifth of patients develops severe disease, leading to death in about 3% to 5% overall, most cases are mild or asymptomatic.
Can Recovered COVID-19 Patients be Reinfected?
The question is, does this infection confer lasting immunity? A new study published in the journal Clinical Microbiology and Infection in July 2020 appears to show that it does not, with antibodies to the severe acute respiratory syndrome coronavirus 2 (SARS-CoV-2) disappearing within three months of infection. This, if confirmed, poses a grave threat of repeated pandemics, in the absence of vaccines or stable natural acquired immunity.
The Patient
The paper is a case report of a 26-year old woman presenting with three days of unexplained fever, sore throat, and cough. The routine laboratory assessment showed a drop in lymphocytes, while a CT scan of the lungs revealed the characteristic bilateral ground-glass opacities of COVID-19.
The presence of the infection was confirmed by reverse transcriptase-polymerase chain reaction (RT-PCR) of nasal swab specimens. The disease was staged by the guidelines for COVID-19 diagnosis and management published by the National Health Commission of China.
The patient had moderate disease, with fever and respiratory symptoms, as well as pneumonia confirmed by imaging. Two weeks later, she tested negative for SARS-CoV-2 repeatedly, and her symptoms resolved, while both laboratory tests and CT scans reverted to normal. She was deemed to have recovered and discharged.
Immunity Measures
The researchers attempted to detect and measure the titer of specific antiviral immune responses, both IgG and IgM, against the viral spike and nucleocapsid antigens. The first step was a chemoluminescent assay. A positive antibody test meant titers above 10 AU/ml.
The patient serum was negative for IgM against the virus on day 56, 68, and 80 from the earliest symptom. Anti-SARS-CoV-2 IgG titers went down from about 47 on day 56 to 12 on day 68. By day 80 the titer was negative, at 7 AU/ml (IgM and IgG antibodies were considered positive when their titers were greater than 10 AU/ml). In other words, the antibodies to the virus disappeared.
No Humoral or Cellular Immunity Detected
Specific neutralizing antibodies targeting SARS-CoV-2 were measured on day 80, using the cytopathic effect (CPE) as an assay. The researchers found that neutralizing activity was negative, with the titer of neutralizing antibodies below 20. Neutralizing titer was expressed as the reciprocal of the highest dilution of the serum for which there was no CPE.
They also confirmed this using peripheral blood monocytic cells (PBMCs), and B cells specifically primed against SARS-CoV-2, were isolated from this group by flow cytometry. They were then stained against a variety of antigens, namely CD19, CD20, CD3, CD14, CD16, CD38, SARS-CoV-2 S1 spike subunit, and SARS-CoV-2 S trimer.
They sorted for B cells specifically binding to the S1 subunit or the trimer - and found that this patient had none.
Earlier Coronavirus-Induced Immunity
With the earlier SARS epidemic, researchers showed that specific anti-SARS-CoV antibodies rose to a peak at 4 months, and remained at detectable levels for 2 years in recovered patients. On the other hand, MERS infections are only partly detectable by serologic assays, and even when positive, antibody levels decrease significantly within the first 6 months following the onset of illness.
Implications for Serologic Studies
The current SARS-CoV-2 virus like SARS and MERS is also a coronavirus, but this current report shows that specific SARS-CoV-2Â  antibodies disappeared in three months of disease onset. This may mean that in any serologic survey, there will be patients with no detectable antibodies, which leads to a lower prevalence rate than the real figure.
Again, since the fall in antibodies may not correspond to neutralizing activity, the neutralizing activity and specific anti-SARS-CoV-2 B cells were separately assessed. These results also agreed with the antibody titer, however, in being negative.
A recent study by Ni et al. (2020) reported that specific antibodies and immune cells were present in 8 patients immediately after discharge, and 6 patients discharged two weeks prior to testing. They found high titers of neutralizing antibodies in those who were newly discharged, but negative titers in one patient on follow up.
Another study showed that there were 14 different powerful neutralizing antibodies against SARS-CoV-2 using high-throughput single-cell RNA and VDJ sequencing of B cells enriched for the viral antigens, in a group of 60 convalescent patients.
The researchers comment, "Taken together, the specific antibodies against SARS-CoV-2 might be short-lived in this convalescent COVID-19 patient, and might not neutralize SARS-CoV-2 infection."
Potential Non-Spike/Nucleocapsid Antibodies
However, it is quite possible that the current patient had other antibodies, potentially neutralizing in nature. Antiviral immunity is conferred by pre-existing antibodies, and memory cells, both B and T. Older studies indicate that memory cells respond specifically to SARS-CoV, and keep the patient protected from reinfection for several years.
The SARS-CoV and SARS-CoV-2 are thought to share the same receptor and have similar phylogenetic descent. Moreover, specific anti-SARS-CoV-2 T cells were observed in newly discharged patients in the study by Ni et al. Therefore, a similar pattern of antibody and cellular immunity may be expected.
The study concludes, "Convalescent COVID-19 patients without detectable antibodies might not indicate the loss of immunity to SARS-CoV-2 reinfection."
It is necessary to perform more extensive studies to examine more samples of convalescent serum to confirm this finding. By assessing both humoral and cellular immunity to the SARS-CoV-2, it should be possible to determine if patients who have recovered are still at risk of acquiring the infection and should be vaccinated, along with the naÃ¯ve population.
In another recent study published in the journal Nature Medicine, researchers looked at 37 symptomatic and 37 asymptomatic patients who were infected with the coronavirus disease. The findings of that study showed than more than 90 percent of the participants in both groups manifested rapid declines in the levels of SARS-CoV-2-specific immunoglobulin G (IgG) antibodies within just two to three months after the onset of infection.

(Dr. Liji Thomas is an OB-GYN, who graduated from the Government Medical College, University of Calicut, Kerala, in 2001).