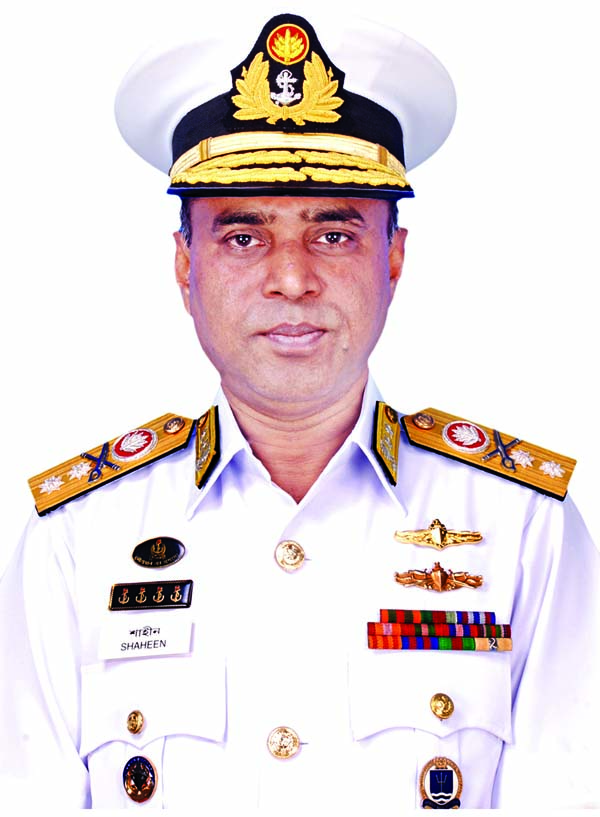 The government has appointed Rear Admiral M Shaheen Iqbal as the chief of Bangladesh Navy by promoting him to the rank of vice-admiral.
His appointment will be effective for three years from Jul 25, the government said in a notice on Saturday. Iqbal is succeeding Admiral AMMM Aurangzeb Chowdhury who is retiring later this month.
The new Navy chief worked his way through Bangladesh Naval Academy and was commissioned in the Executive Branch in 1982 after joining the Navy as an officer cadet in 1980, according to the Bangladesh Navy website.
The government appointed him assistant chief of the naval staff for operations in 2019.
In his long naval career, Iqbal commanded various types of naval ships: frigate, offshore patrol vessel, large patrol craft and fast-attack craft.
He also commanded two important shore establishments of Bangladesh Navy-BNS Titumir and School of Maritime Warfare and Tactics.
The officer served the National Security Intelligence as a director for two years from January 2011.
He assumed the duties of Commodore Commanding Khulna in February 2013 and completed his tenure in January 2015.
He also served as staff officer operations of Commodore Commanding BN Flotilla. Iqbal was a "Blue Flag" bearer as a member of the UN Guard Contingent in Iraq from November 1997 to February 1999.
During his service career, Iqbal attended various courses at home and abroad. He specialised in anti-submarine warfare from India. He completed Officers' Weapon Course in the School of Infantry & Tactics, International Surface Warfare Course in the US, and Combined Force Maritime Component Commander Flag Officers Course at Hawaii in the US.
He graduated from the Naval Staff College in the US. He completed the Armed Forces War Course and the National Defence Course in the National Defence College.
Besides the US and India, he visited the UK, France, Singapore, Malaysia, UAE, Sri Lanka, Pakistan, Hong Kong, China, Nepal and Australia.
Iqbal is married to Monira Rowshan Iqbal who worked as a teacher. They have a son.