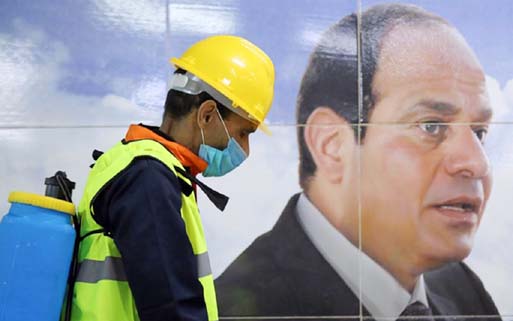 A member of a medical team is seen beside a banner for Egyptian President Abdel Fattah el-Sisi, as he sprays disinfectant as a precautionary move amid concerns over the coronavirus disease outbreak in Cairo. Internet

The threat of conflict in Libya, water security worries and a flatlining tourist sector risk upending a nascent rally in Egyptian bonds, bankers and economists say.
The North African country has attracted a wave of foreign investor interest in the past three months, emboldened by fresh financing from the International Monetary Fund (IMF), and short-term local debt offering yields of around 13%, among the highest in emerging markets.
Bankers and economists warn, however, that the yield bonanza masks an economy with weak prospects and heightened political risk, with the Cairo bourse falling on several days this month on fears of a Libya intervention. Parliament gave President Abdel-Fattah al-Sisi last week the green light for possible military intervention in Libya.
A deployment of armed forces into Libya could lead to higher military spending at a time when COVID-19 is already hitting the budget deficit.
"Obviously the IMF support package has reassured foreign investors and that is why there has been an improvement in flows, but the fundamentals are still weak," said Zeina Rizk, executive fixed income director at Arqaam Capital.
"The virus is raging, tourism is down, and government spending - needed to boost the economy - will add further leverage," she added.
Adding further uncertainty, Egypt has failed so far to reach a deal with Ethiopia to regulate flows from its Grand Renaissance Dam (GERD) which threatens its main water source.
"The political risk has deteriorated," said Hasnain Malik, head of equity research at Tellimer Research.
The tourism industry, meanwhile, which makes up as much as 15% of GDP, is unlikely to recover soon, analysts said. Egypt, unlike Tunisia and Morocco, has not been added to the European Union's list of safe COVID-19 countries.
Egypt's reported COVID-19 cases have been falling in the past weeks but the number of new infections remains too high for now to lift the travel warning, diplomats said.
Tourist flights to Red Sea resorts have been rising since airports reopened on July 1, but normal occupancy rates would be only back by March or April next year, said Alaa Akel, head of the Egyptian Hotels Association Red Sea.
More than half of the hotels are back in business after two months of lockdown and those still closed will probably re-open by November, he added.
The central bank and state press centre did not respond to questions sent by Reuters.
The government expected growth of 3.5% in the fiscal year 2020/21, which began in July, but growth could slow to 2% if the coronavirus crisis continues until year-end, Planning Minister Hala al-Saeed said in May.

Sisi in March approved a 100 billion pound ($6 billion) plan to stem the economic fallout, including support for the tourism sector, payments of salaries for staff sent home by their employers and cash for informal workers.
With foreign reserves standing at $38 billion, Egypt's finances are in much better shape than in 2011 after the toppling of Hosni Mubarak.
This is down from $45 billion from before the pandemic, but the central bank has been able to support the currency, which strengthened in July after a dip the month before, a gain that helped buyers of short-term debt make a profit, bankers say.
"We have been seeing significant flows back into Egypt," said Farouk Soussa, senior Middle East and North Africa economist at Goldman Sachs.
"The inflows have indeed been at the short end of the curve, reflecting higher short term yields and the potential for near-term strengthening in the pound, which make the carry trade the most lucrative in Egypt at the moment," said Soussa.
He was referring to a strategy which involves investors borrowing in currencies where interest rates are low to invest in countries where yields are high.
Egypt's international bonds have performed better than some other similarly rated emerging market sovereigns, such as El Salvador and Sri Lanka, since the March sell-off.
Egypt's 2025, 2027 and 2040 issues are trading around 12% or less from pre-pandemic highs, Refinitiv data shows.
But analysts say the inflow of "hot money"-or investments made for short periods-does not translate into new jobs in the real economy and might disappear if the currency slips.
Barring its energy sector, Egypt had been struggling to attract foreign direct investment (FDI), a predicament blamed by analysts on bureaucracy and an expansion of army-owned firms in sectors from food production to cement.
"Increasing long term foreign direct investment further will require improvement in Doing Business indicators, maintaining a sound, predictable macroeconomic framework and political stability," Raza Agha, head of emerging markets credit strategy, Legal & General Investment Management.